*Together Again for the First Time* 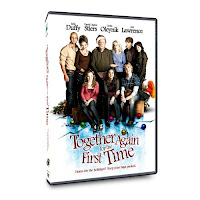 Set in Spokane at Christmas; first written in 1985. Comic in-fighting ensues when two middle-aged newlyweds (McColm himself and Karen Kalensky), who have already been married for seven years, bring their young-adult children together (again, for the first time) for the holidays. "Matters only get worse with the unexpected arrival of an ex-boyfriend, an unannounced television broadcast, and the revelation of a dark family secret." The 85-minute straight-to-DVD movie version, filmed last year in Provo, Utah, was released on Oct. 28. McColm's 23-year-old play is receiving its first professional stage production here, at just about the same time as the movie's premiere -- which may be some kind of world record. Buy the DVD here. More info here. A review is here.