The Belle of Amherst 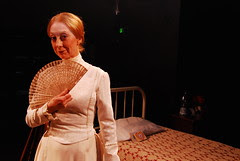 The Belle of Amherst
Originally uploaded by Sir Andrew Aguecheek

Ellen Crawford, who played Nurse Lydia Wright on E.R. for 10 years (1994-2003) and who starts her run at Interplayers this week as Emily Dickinson in William Luce’s The Belle of Amherst, will interrupt her run next week and miss three performances so that she can fly back to L.A. to film the two-hour finale of the long-running medical drama.

Crawford spoke the first lines in the very first episode: “Dr. Green? There’s a patient for you, Dr. Green.” “That way, in my first line, I introduced both Anthony Edwards and George Clooney,” she says. “Clooney’s character came in drunk,” she adds, confirming that George is quite the jokester on-set. She hasn’t yet seen the script for the E.R. finale.

Crawford just returned from doing A Touch of the Poet at the 14th Street Theater in New York with Daniel J. Travanti (Hill Street Blues). Terry Teachout in the Wall Street Journal called included the show in his year-end best-of list, calling the acting duo “galvanically powerful.” Teachout remarked that he hadn’t liked the Gabriel Byrne production years before, but that sometimes critics make mistakes, and that what he thought wasn’t a very good play was in fact, given a good production like Crawford’s and Travanti’s, a good script by O’Neill.

From a 2001 mini-bio of Crawford
http://rainbowsplash.com/thescribesmoviecom/bios.shtml
Fresh out of high school, Ellen was chosen out of 3500 hopeful actors for her first professional role in the Chicago company of "Hair" performing with Joe Mantegna, Alaina Reed-Hall and Stan Shaw. This set the stage for Ellen, who grew up in Normal, Illinois with aspirations of becoming an actress and who now plays Nurse Lydia Wright on the award-winning NBC series "ER."_Ellen attended Carnegie-Mellon University in Pittsburgh and worked her summer breaks with regional and national tour companies. On Broadway, she received critical praise for her role as Sister Lee in "Do Black Patent Leather Shoes Really Reflect Up?"_While currently in her eighth season on "ER," Ellen has also appeared in numerous television series' such as "China Beach," "thirtysomething," "Tales From the Crypt," "Murder She Wrote," "Night Court" and "Diagnosis: Murder." Ellen's telefilms include "Twice Upon A Time" (as Molly Ringwald's mother), "The Story Lady" (as Jessica Tandy's acting teacher) and "Cradle of Conspiracy" (as a villainous baby broker)._Ellen's feature credits include "Soldier," "Ulterior Motives" and "War of the Roses." In 1999 she starred in the short film "Entropy," which was directed and produced by Daniel T. Green and also starred David Ackert ("General Hospital") and Rob Porter ("Final Justice").

Belle will be directed here by Christopher Schario of the Public Theater in Lewiston-Auburn, Maine: “He’s a Carnegie-Mellon alum like me.”
Schario brought in Crawford and her husband Michael Genovese (who played a cop and Nurse Lydia’s love interest for awhile on E.R.) to do A.R. Gurney’s Love Letters as a fund-raiser.
In about 1997 and again in 2003, Crawford performed The Belle of Amherst under Schario’s direction at the Public.
And now the same team is bringing it to Spokane.

On relearning her lines:
“I was mumbling all over L.A. I mean, it’s two hours onstage by yourself. I thought about putting a Bluetooth on, just so people wouldn’t think I was crazy.”

On researching Emily Dickinson:
“When I started this project, all I knew was the two or three poems that everybody learns in high school,” she says – “I heard a fly buzz when I died” and “Because I would not stop for Death.”
“One thing I love about being an actor is that you are perpetually a student.’

What she found surprising:
“The joy of life in her works, the ecstasy. Her sensuality.”
She mentions a couple of suitors that Dickinson had, that a contemporary witness saw her sitting once on one of those men’s laps.
(An amazing image: Emily D. before she became a recluse.)

ELLEN CRAWFORD (cont’d.)
“I look at us now, with iPods in our ears, or else we’re on our Blackberrys … what’s important about Emily Dickinson now is that we don’t really look at things, we don’t really SEE. Whether it’s being joyfyl at work or being sorrowful, she embraces it. She even embraces the search for what’s on the other side [of death].”
Crawford’s husband, Mike Genovese, made her a present of a first edition of Dickinson’s letters. And what did she learn from reading the letters? Tidbits about Henrietta Sweetser, a nosey neighbor who brought out Dickinson’s sarcastic side. About Mabel Todd Loomis, the woman with whom E.D.’s brother Austin had an affair. (Austin was a year older, Lavinia [the possessive sister] three years younger, than E.D.)

Crawford on working on Interplayers’ extreme thrust stage (she and Schario did this show six years ago in Maine on a proscenium):
“The voms really help. But you can’t do everything in those corners (while seated on those corner benches). We’re trying to make her movements somewhat circular. You try to share, but not everybody is going to be able to see everything, see her face, all the time.
But there’s an exciting quality to it – it’s very intimate, and you’re never very far from the audience.
Oh, yes, we’ve reblocked it entirely. Some business is the same – sitting at a desk is sitting at a desk . But we have a bedroom and a parlor, and a window seat down left and a garden area down right, and we define those areas with lights.”

Any stop-gap measures if she were suddenly to go up?
“That’s a nice idea,” says Crawford. “But I’ve never had to use one, and that’s all I will say about that,” she says, pointedly. “But it’s a nice idea.”
Then she mumbled something about how “George [Clooney] used to write his lines on his sheets.” There was a slightly disapproving, dare I say schoolmarmish tone in her voice.
“Theater is an actor’s medium,” she continues. “It’s very verbal. When I was doing regional theater [regularly], we would do what we would call ‘creature features’ – you know, school matinees at 10 a.m. or something. But it’s so important to guide the next generation of the audience. If they don’t see [good theater], they won’t know what it is.”

She tells a story about an acquaintance who came to see her in *Lulu,* the German Expressionist drama. “
“And he’d never seen a live stage show before. Now, I’m not sure German Expressionism is where you want to start your theater-going experience. But he loved it - -he said, ‘If this is what theater is, then I want to come all the time.’”
“I come from the Midwest, and I was always told that they won’t go for anything but basic comedies there. Now, there’s nothing wrong with sheer entertainment – but if it’s good [she mentions Who’s Afraid of Virginia Woolf?], people will respond to it.”

On Emily’s reclusiveness:
“Luce’s take on it was that she did it on purpose, that it was a game for her. It may have become that. There may have been some problems with her eyes later in life.
If you look at the letters, she was very involved with the life of her town. In many ways, she was fine staying at home. She was with people she loved, and why should she spend time socializing with the village gossips?”

Everyone has their own theories about E.D.’s suitors. They were all married, and all older, she says in the play. There are several candidates, thought Luce’s belief is that Charles Wadsworth, a Philadelphia preacher, was the love of her life. He was married, and they met only twice – in 1860 and 1880 (when E.D. was 30 and 50).

Dickinson wasn't religious but spiritual.
Lucky for us, she was articulate and that she left an extraordinary volume of correspondence.
Living in seclusion, she tended to ask the greater questions about life.
She was criticized by scholars later on for writing her poems while the Civil War was going on. But as she says in the play, "war was so oblique to me."
She can be very funny, very witty in the letters. But a lot of them were burned: "You did burn letters in those days."
Crawford emphasizes that E.D. lived in a house full of other people -- her father, her brother Austin, her sister Lavinia. So she wasn't completely like a nun, and may have had the outgoing interpersonal skills that you see in Luce's play.
She lowered gingerbread out her window to schoolkids down below.
Crawford visited the Evergreens, E.D.'s house in Amherst, and actually got volunteered to play the role of the woman who lowered gingerbread in a basket to school kids who were on a tour. She was dressed all in white, and sure enough, one of the schoolboys whispered, "Do you think that's REALLY Emily Dickinson?"

About that Yo-Yo Ma cello music that you'll hear at acts' ends in the show: Independent of each other, Crawford's director and husband — asked to find music for the show — selected the exact same pieces.

Her advice to young actors:
Stage actors should get some film training, "even if it's just an introduction."
"You need to do whatever you can do to make a living." Making the transition "from theater to film is easier" than the other way around.
Film acting is much smaller, of course: "Lots of times, it's just thinking — it's less than you would do in real life."
"Get theater training and then bring it way down."
"You really have to want it. I've found, in talking to students, that the parents either are afraid, or the parents want it."
In the former case, she says, "I tell parents, there's really no way to stop them — because if they really love acting, then that's what they have to do to be happy. I absolve the parents of all guilt."
"If you're not gifted, you find out very quickly. And then it's no longer really fun."
"I love it, but it's a tough business. Security? Forget about it. But I've been a union actor since I was 18." (SAG, AFTRA, and Equity)
"We don't think of film or theater as a business, but it is." Belonging to a union makes it a better and more serious product: "When everybody is doing everyone else a favor, it shows. When it's a business, it's a different kind of work."
To prepare for playing Dickinson, Crawford assembled:
a couple of the biographies; cookbooks from the period (and taken from recipes used at E.D.'s house); books on Victorian manners; lots of books about E.D. and that she herself read -- Jane Eyre, Wuthering Heights, The Mill on the Floss; a biography of Helen Hunt Jackson, the author of Ramona and E.D's friend, who's mentioned in Luce's script; baked goods and gingerbread; the collected poems and letters.
"All of Emily's suitors were married, and older than her."

And then, our lunch concluded, off Crawford went in her jaunty red beret — off into the Spokane rain to do a run-through and her first open dress rehearsal. She was eager to put Emily Dickinson in front of an audience again.
Bobo the Theater Ho at 6:18 PM