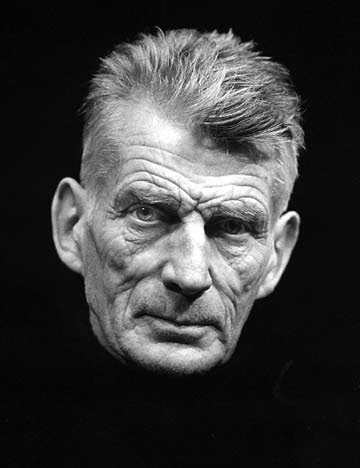 Bleak despairing God the anguish can't bear the Beckett anguish searching joy despondent hopeless escape self can't wait won't bear all the sadness give us instead a musical comedy.

Samuel Beckett's Waiting for Godot: Two tramps on a trash heap talk-talk-talk for two hours. About nothing, nothing at all. (Bleak despairing God the anguish.)
That's the excuse for not going, anyway: It's dreary, nothing happens, we just want to see something that will make us happy.
But Godot, at several junctures, offers a qualified kind of happiness. (Perhaps, during your sojourn here on Earth, you were expecting happiness of the absolute and unqualified kind?)

At Interplayers (through April 11), you'll still be amused, for example, by Reed McColm's look of bliss while munching on a carrot. (He's Estragon or "Gogo," the whinier and more despairing of the two tramps.)
Beckett’s sad clowns enact vaudeville routines that would be funny anywhere: a rapid-fire hat exchange, four men rolling around on the ground and unable to get up, an agreement about hanging themselves followed by an argument over who should hang himself first.
But the jokes are only meant to fend off despair. Yes, we understand, you don’t feel any despair. You don’t have to, because you believe in God.
But what if you’re wrong? What if salvation isn’t coming? (Just suppose, for the sake of argument.) Then how would you act? You’d tell jokes to pass the time. You’d try to keep yourself entertained.

The problem is that director Karen Kalensky's production of Godot, as if straining too hard to find the comedy in a bleak play, hams up the jokes. Somebody refers to having an erection, and there's a lot of comic mugging; or they pause to cogitate deeply, so deeply, and the chins beneath the frowns are propped up by index fingers.

As Vladimir (“Didi”), the more philosophical and resilient of the pair, Jonn Jorgensen forms a pair of sad clowns with McColm. They hug, then break off the hug, smile, hug again, then cry.
But hugs aren't enough when you're facing life's emptiness, and the duo’s exchanges lack vaudeville frenzy. Godot needs to be played fast and faster, to set up the silences.
Fortunately, the second act offers more: more forgetfulness, more fighting off boredom, more slapstick, more direct address to the audience.

In the play’s conclusion, Jorgensen — who did a half-dozen shows here in the mid-'90s, and glad to see him back — achieves the kind of tragic status he could have been hinting at more all along. Riffing on Pozzo's famous description of life's brevity ("They give birth astride of a grave, the light gleams an instant, then it's night once more"), Jorgensen settled into haunting sadness for Vladimir's final monologue: "Astride of a grave and a difficult birth. Down in the hole, lingeringly, the grave-digger puts on the forceps. We have time to grow old. The air is full of our cries.”
As Lucky, the white-haired, bent-backed slave who jumps to every one of Pozzo's commands, Michael Maher groans and grumbles, seething with resentment — and it's funny, at least in the non-verbal sequences. The famous stream-of-consciousness monologue, however — it arrives when Pozzo issues the command to "think, pig" — is disappointing. Maher stumbled and went slow, swallowing his consonants and failing to highlight a rambling speech’s few discernible themes (God is impersonal, human reason is limited).

As Pozzo the grandiose slave master, Damon Abdallah delivers the evening's finest multi-dimensional performance. His voice, deepened, teeters between haughty and insecure. He's sadistic, but he also lets us in on how it's all an act. His angular rodent movements could be assertive, could be paranoid.
Abdallah has a beautiful speech about the beauty of twilight ("this veil of gentleness and peace") that's matched by the subtlety of (Dan Polzin's -- XX) Justin Schmidt's lighting scheme, with the light gradually turning from pink to rose to — this being Beckett — the sudden onset of night's blackness. ("That's how it is on this bitch of an earth," mutters Pozzo.)

None of them know why they're here. They feel powerless to go on, they don't know whether to split up or stick it out together. (Bleak despairing God the anguish.) Didi and Gogo, in other words, are a lot like us. We are the ones who are waiting for Godot, and misery loves company, and a production of Beckett's play, even one as uneven as this, has its consolations.