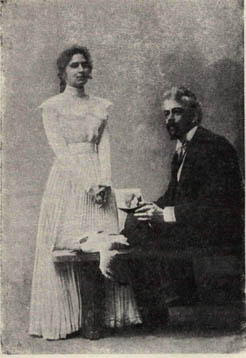 Maybe it's a sign for theater everywhere -- even for theater that's in a city on the edge of a state that's stuck in a corner of the Union.
In the New York Times, Ben Brantley cites the ongoing Broadway season as surprisingly profitable and serious.
Read through his season review. Consider all the play titles. Is there an old-fashioned, inoffensive, nice light comedy among them?
And half of Broadway's business involves tourists.
Theater, at its best, can be thoughtful and visceral, immediate. In an era of airhead celebrity gossip and mindless Twitter crap, there are some folks willing to pay to see plays that aren't derived from comic books, the tried and true, or theater museums.

[ photo: Konstantin Stanislavsky as Trigorin and Maria Roksanova as Nina in Moscow Art Theatre's 1898 production of Chekhov's *The Seagull* (because Kristin Scott Thomas was so good in *Seagull* last year as Mme. Arkadina) ]
Bobo the Theater Ho at 6:46 PM