Bobo is on vacation, seeing seven plays in five days and spending hours in Powell's trying to figure out how many books I can afford and finally settling on eight plays (Fugard and Friel, Moises Kaufman and Ayckbourn, Ibsen [so I can follow along with the radio versions of the late plays, which I have never read, which are included in the BBC video collection, which I have been devouring, with the divine Juliet Stevenson as Nora Helmer and a moving Little Eyolf with Anthony Hopkins and Diana Rigg], along with a Terrence McNally and a Pete Gurney, just becase they're coming up at the Civic).
Five days out of the year spent just the way I like it. (Hey, I have this coming -- Dannie and Kylie, long-suffering wife and daughter of Bobo, spent two weeks this summer in Switzerland. I was stuck at home with the dog.) 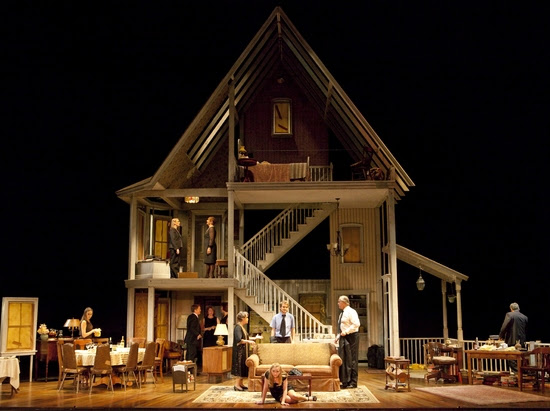 **
But last night: 3 1/2 hours went by quickly. Tracy Letts takes on the ghosts of Chekhov (Three Sisters; there are three daughters here, searching, searching) and, especially, O'Neill (family dysfunction and secrets, but at least here done with a sense of humor and a modern idiom.
It's three generations of an Oklahoma family that isn't functioning at all, much less dysfunctioning. Estelle Parsons as the pill-popping matriarch: gravelly voiced, realistically drug-addled, swaying listlesslyh in her living room, then swooping down like small hawk to attack family members with her talons. A haunting final image: Parsons bobbing about in a deserted house like a pinball, babbling in her own little painkiller reality, escaping upstairs into the arms of the only other human left in the house -- a woman she has, like everyone else in her life, despised and held at arm's length.
The patriarch played as twitchier than I'd expected from reading it -- scowling at life, amused at ironies, the humor a mask for all the pain within. That enormous three-story set, filled with stage business in the shadows, a sense of family life, lived, off to the side of whatever focal scene was taking place.
The Indian woman as the outsider, our way into the play. Barbara, the eldest daughter, probably the foulest-mouthed of the lot, a signal of just how despairing she is over her divorce and rebellious daughter and current family tragedies and failure to live up to her father's hopes for her in academia. Three scenes from the end, the blocking echoed the opening scene of patriarch hiring the maid; now the oldest daughter is "in charge," and just as alcohol-soaked and disbelieving and pissed-off as her father was. Here's where Letts takes on the Big Important American play themes: "As if what was disappearing had already disappeared. As if it was too late. As if it was already over. And no one saw it go. This country, this experiment, America, this hubris: what a lament, if no one saw it go."
Favorite lines: "My wife takes pills and I drink. That's the bargain we've struck...."  "Little Charles isn't complicated, he's just unemployed."  Barbara: "This is not the Midwest. All right? Michigan is the Midwest, God knows why. This is the Plains: a state of mind, right, some spiritual affliction, like the Blues." Bill: "Are you okay?" "I'm fine. Just got the Plains."
The story about the dying birds: "this serial parakeet killer."
"I swear to God, you psychoanalyze me right now, I skin you."
Married couple arguing over his infidelity: "And her name is Cindy." "I know her stupid name. At least do me the courtesy of recognizing when I'm demeaning you."
Mother to teen daughter, after a death in the family: "Listen to me: die after me, all right? I don't care what else you do, where you go, how you screw up your life, just ... survive. Outlive me, please." "I'll do my best."
Matriarch to schlumpy middle daughter, who's 44 and unmarried: "Honey, you wore a suit to your father's funeral. A woman doesn't wear a suit to a funeral --." "God, you're weird; it's a black suit." "You look like a magician's assistant."
One of the wonders is: All 13 figures are fully characterized. The youngest daughter, desperate to be loved, the absentee family member -- a bit too desperate, protesting too much that the sleazeball loves her, even when it's clear that he treats her with contempt.
In a play full of self-loathing and other-hatred, the decency and goodness of Uncle Charley's bucking up his son, telling off his wife. The bravery of the ineffectual and misfit "cousins" trying to forge a better life for themselves.
p. 77, Pippi Longstocking
p. 85, the blessing
My only criticisms? Unconvincing stage slaps and fights; a couple of Barbara's scene-ending zingers rushed through and not allowed to register. But Letts is really a master of idioms -- academic and working-class, elderly and teen, urban and country, encouraging and deeply, disturbingly cynical.
And it's such a well-constructed play. Little hints ("I'm not looking for a man"; men are always saying, 'I'm here now" when they've been absent, physically and emotionally, for months; the T.S. Eliot quotes; and more) cycle back to tie up the action.
[ photo: Broadwayworld.com; 2nd national tour ]

**
And Bobo needs some rest and relaxation: Too much stress and caffeine and too little sleep brought on another bout with atrial fibrillation (my "irregulary irregular heartbeat"). I get lightheaded; I can feel my heart doing the rumba. They make me go see my diminutive Ukrainian cardiologist, whose idea of being effusive involves cracking a slight smile. But she seems knowledgeable -- also bossy, as when they knocked me out last week so they could stick a tiny camera down my gullet and take photos of my ticker (quite healthy, thanks -- all those years of running -- but inclined to send out "chaotic electrical signals"). Then they sent a lightning bolt through my heart (just milliseconds, still left a slight sunburn on chest and back) to jolt it back, like Frankenstein's monster, into a regular rhythm. Not life-threatening, but I'll probably end up on medication so as to create a steady, dependable backbeat for the syncopated jazz solo that is the life of Bobo.
Bobo the Theater Ho at 3:36 PM