review of "*Chess,* in concert" 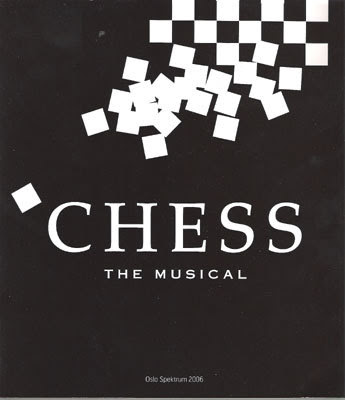 I'm grateful to Yvonne Johnson and the Civic for delivering a concert-style production of a seldom-performed musical, and to all the singers and musicians and crew members who volunteered their time to make it happen. But Chess is only a partial success.

With lyrics by Tim Rice, a book by playwright Richard Nelson, and music by the ABBA guys, Chess has a decent pedigree.

There were problems with dynamics: In too many numbers, it was the singers vs. the orchestra (especially the horns and guitar) -- and the singers didn't win. The early, establishing numbers like "Freddie's Entrance" and "Press Conference" were almost disastrous in just being undifferentiated sonic onslaughts -- we weren't getting the information we needed to get situated. (Perhaps putting 13 musicians onstage instead of in the pit contributed to the problem? So did some mic failures early on -- but the latter half of the first act avoided that problem, largely by concentrating on simple piano accompaniment for ballads and more comprehendable lyrics.) Early in Act One, particularly, the passages of dialogue came as a relief: At last, quieter lines that we can understand.

The score is a mix of prosaic and forgettable songs with several highlights.
Too many songs in Chess are expository, like the opening "Story of Chess" and songs like "Merchandisers" and "Diplomats," which aim to inform more than to inspire. Fairly often in this show, people break out into song not because they're feeling any deep emotion, but because Nelson and Rice need to inform us some more about some detail of their plot.
It's a plot that, especially in the second act, starts to resemble a soap opera draped around a story of Cold War intrigue so as to personalize big forces that we might be too imperceptive to grasp. (Hence the CIA/KGB faceoff gets entangled in the more graspable love triangle of a woman torn between two grandmasters.)
Some of the highlights clustered in the middle of Act One: "Quartet" featured Molokov (Henry McNulty), the Arbiter (Tim Campbell), Florence (Andrea Dawson) and Anatoly (Jordan Gookin) singing precisely and in counterpoint, with the argument over chess rules raging but each voice distinct and powerful. "You Want To Lose Your Only Friend?" -- a duet for Robby French as Freddy, the brash American/Bobby Fischer figure, and the wonderful Andrea Dawson as Florence, the woman who gets caught in an international grandmaster sandwich -- was powerfully sung, with its "1956 and Budapest is falling" refrain taking us back to the wonderful opening image of a little girl, fascinated with chess pieces. And French rapped out the lyrics to "One Night in Bangkok," celebrating the lavish nightlife that Johnson's staging (slide show of international locales, a collection of flags with stars and stripes pitted against hammer and sickle) helped emphasize.
But there's more to this musical than just its one hit song."Terrace Duet" immediately follows, with Dawson and Gookin, in the course of just one tune, making clear why their characters mistrust each other but still start to fall, almost unwillingly, into love.
After Freddie has been pushed aside and lost the girl, French sits at the front of the stage for the self-pitying "Taste of Pity" -- recalling his moving sadness as Jesus in the Civic's Godspell last season, but in the service here of another song that tells rather than shows. Dawson finishes Act One impressively with "nobody on nobody's side," and then Gookin, as Anatoly, stands and delivers the "Anthem" to self-loyalty over patriotism: "My land's only borders lie around my heart." He's going to defect, and damn the consequences.

Act Two is about the consequences. A weakness in the book is bringing in Svetlana, Anatoly's estranged Russian wife. Emily Bayne sings expressively, but we've barely heard her name and suddenly, in three successive songs, we're supposed to care about the inner turmoil of her heart.
But those manipulations are more than made up for (after all, Florence and Anatoly will turn out to have been terribly manipulated by their governments) by Dawson's delivery of "Heaven Help My Heart" (praying in a church, troubled by what it will mean to fall for Anatoly). It's almost impossible to praise Dawson's talent too much; she's that good.
But soon after you recover after feeling exhilarated by Dawson's voice, the book falls into the trap of analogizing everthing to chess moves: "Don't we all make foolish moves?" and "It's your move now," and other facile chess comparisons, and we are supposed to Nod Knowingly at the Weighty Significance.
Gookin and Dawson share a lovely duet, the reprise of "You and I" (marred by Rice's habit of stepping in the lyrics on obvious rhymes), and we arrive at the rather unlikely denouement.

Bobo remembers Jordan Gookin as a gifted but still young comic actor who skilfully spoofed up a lot of comedies at Lake City Playhouse several years ago. He went to Lake Arrowhead (I think) in California and now has returned -- more mature, singing and acting well, glowering as the disaffected Russian and playing a lead dramatic role effectively. Welcome back, Jordan.

Henry McNulty, as the KGB agent who acts as the Russian chess player's "second" or consultant, conveyed Solzhenitsyn dignity in a manner that commanded respect.

All three principals -- French, Dawson, Gookin -- were impressive. I just wanted to hear them in the service of better (or at least more consistently compelling) material.
I wanted to like Chess more, I really did. I enjoy and dabble at chess; I like political intrigue; I remember Fischer vs. Spassky and later, glasnost and Gorbachev and all of it. I even like musicals with sad but meaningful endings, like this one. And this performance of Nelson's Broadway version (which over-talks a lot of plot points) left me wishing that Americans might be able to hear Trevor Nunn's 1986 London version (which has different locales, different plot details and a very different song list).
But a lot of it was over-loud wailing-screaming rock opera that was kind of like melodrama ... except that they were playing for high political stakes ... except that it's really just a love triangle thrown not very plausibly into the middle of an international power struggle ... except that there were several lovely songs performed by all three principals, especially Dawson as Florence ... except that many of the songs are neither hummable or memorable ... except that this show's goals are laudable ... except that it doesn't attain its goals.
A musical like Chess can leave a guy feeling seriously ambivalent.

One performance remains at the Civic: Halloween night from 7:30-9:45 pm. (You can still party afterwards.)
Bobo the Theater Ho at 12:12 AM