Nick Stokes is a Tacoma playwright. Sandy Hosking is co-playwright in residence at Spokane Civic Theatre; she has an MFA from EWU, is editor of Inland NW Homes & Lifestyles magazine, and has had her plays produced all over the U.S. and Canada.
In Stokes' two plays, sisters lie to each other and a couple relaxes at the beach.
In Hosking's six plays, an atheist seeks converts, Vikings have to downsize, a former couple's reunion is bittersweet, and a man must pay a ridiculous tax (among much else).
In addition, Hosking's 7-year-old son will recite a poem entitled "My Bug." 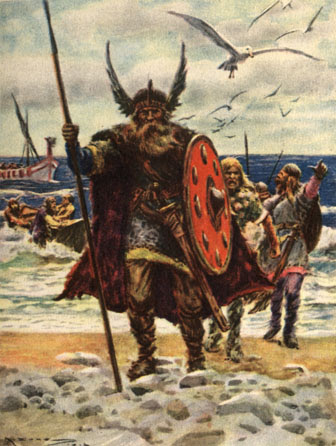 Actors at this staged reading will include Tony and Maria Caprile, Penny Lucas, Will Lund, Emily Hiller, Nina Kelly and Molly Parish.
[photo: Nick Stokes, from artisttrust.org;
also from digital.library.upenn.edu -- "The Landing of the Vikings," from a 1917 book by Henrietta Elizabeth Marshall called This County of Ours: The Story of the United States]
Bobo the Theater Ho at 5:19 PM