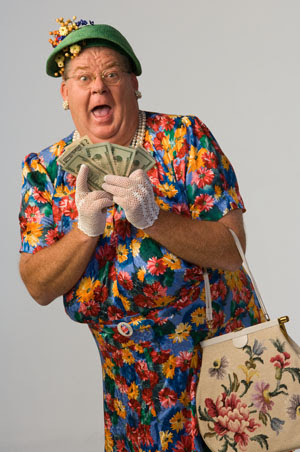 [photo of Joe Sears, one of the Tuna creators, as Aunt Pearl Burras, from the Austin Chronicle]

Bobo's Nov. 26 print review of A Tuna Christmas at the Civic is gimmicky, as you'll see. It says what I intended, but I want to expand on some points.
This is a good show that's consistently funny. I don't think it's a great show, because I don't think that it conveys the loneliness and sadness of some of the characters. To pull off physical comedy as well as Dan Anderson and Damon Mentzer do is remarkable. But in my view, a production that's predominately full of hilarious physical and verbal comedy but which also has touches of pathos and sentiment is superior to a show that serves up comedy alone.
Petey Fiske is pathetic and funny, but also touching: He's an inept fool and he keeps getting brutalized and overwhelmed by animals, but he LOVES those animals, and at least he's trying to help creatures that are literally society's castoffs and discards. I remember seeing flashes of that personal, pathetic sadness in Bill Marlowe's own performance three years ago at ARt, but not in Anderson's this time around.
But you can only admire the logistics of this show — all the memorizing and quick changes and rapid-fire timing.  The five-person backstage crew (were there even more?) deserve much applause for the quick changes and momentary impersonation of the two actors, the UFO, everything.

I can imagine playgoers who are seeing Tuna Christmas for the first time being really pleased with and amused by this production.
But it may have a different effect on those who've seen the show before.
Because you can't just cite the ADVANTAGES of remounting an often-produced play (Tuna Christmas hasn't been done at the Civic before, but it has elsewhere, and it's hilarious, and it has name-recognition in this market). There are also, from a theater's point of view, some DISadvantages: Folks around here may have already seen this script performed elsewhere (2001 at Interplayers and 2006 at Actors Rep for Tuna Christmas, and that doesn't count at least a couple of other Greater Tuna productions).
(Click here for Robert Faires' April 2002 article in the Austin Chronicle on "The Secret History of Tuna.")
And you have to measure up to the memories. And this production, in my opinion, mostly does, but not completely.
Take the final scene: divorced Arles Struvie maneuvering for a dance with Bertha Bumiller (reluctant to drink alcohol, yearning to have her husband and a stable home life back, but lonely and not unwelcoming when it comes to being the recipient of an advance by a locally famous radio personality). Mentzer's progressive drunkenness and stiffening with pleasure at the touch of a man after so long were very well-observed. But since two earlier exchanges about Bertha's loneliness weren't given their full weight, the scene seemed more cute than Christmas-sentimental. (I'm referring to Bertha's reply to Stanley, that all she wants for Christmas is his father at home; and Stanley's frank admission to Aunt Pearl that the husband ain't never gonna come home.)
I didn't think Anderson vocally differentiated Didi Snavely (the gun-shop owner "with a voice like an ashtray full of burnt-out cigarette butts," as I think one reviewer put it) from Petey or Jody Bumiller (the little boy). (I thought Didi could be angrier -- she's arming herself to the teeth and has a no-good deadbeat UFOlogist of a drunken husband.)
But both Anderson and Mentzer were amazing, stunningly good in the Dixie-and-Pearl scene that closes the first act. They must have studied the characteristics of elderly women, because they captured all of it — aching bones, facial tics, eagerness to be regarded as lively still, even if their more energetic glory days are long gone.
The Civic's Tuna isn't a perfect show, but it's very good, and funny, and entertaining.