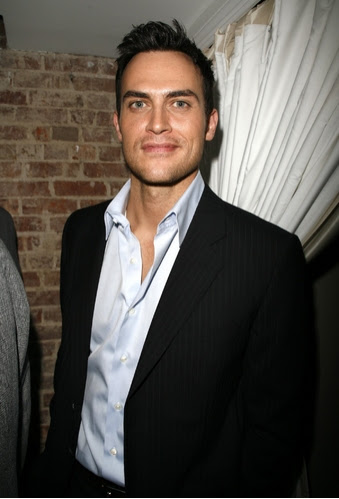 The Inlander has a cover story on Cheyenne Jackson, printed now and on stands tomorrow. The story was written by Daniel Walters, who presents a concise approach to how long and hard Jackson worked to get where he is today: from Newport to Spokane and CdA-area theaters -- and then, after 9/11, on to New York, success on Broadway and now on 30 Rock.
Bobo has to own up to professional envy: I wish I'd written this story. But Daniel, as always, does thorough reporting and then artfully presents his findings, starting out with a Cheyenne fanatic, backing up for the rural-boy-in-conservative-small-town backstory, the difficulty of his coming out, then ruminating on questions like how great a part good looks, luck and sheer hard work have played in Cheyenne's success. We streamlined the draft from 3,800 to 2,800 words, and I think it reads better now.
And yes, a couple of local theater luminaries are quoted.

I'm glad Daniel jumped on this story, because this is only (by my reckoning) the ninth time (in 16 years) that The Inlander has featured theater on its cover: July '95 on Bent at the Civic's Studio; early '99 with Patty Duke in the Civic's Glass Menagerie; Dec. '02 for Rent; both times Lion King has visited; both times Phantom has visited; Les Miz in Aug. '08; and then this story.

Some factoids and quotes about Cheyenne Jackson:
For both Xanadu and All Shook Up, the intended leads dropped out (because of injury, and other reasons), and so Cheyenne, who'd been understudying or preparing the role got in. Daniel's story has a section on how Cheyenne has enjoyed some good luck — but also endured a lot of hard work.
Cheyenne was sometimes referred to as "the Xanadude."
Cheyenne got a little racy in his patter at Feinstein's last March, even dropped an F-bomb. Barbara Cook (who won a Tony for Music Man 52 years ago, and who's a great cabaret singer) is sitting in the front row. She F-bombed right back at him.
Cheyenne took a chance and moved to New York when he was 28 — a little older than all those Juilliard kids, as he says, but also with more life experience. Less than six weeks later, he was actually going on as an understudy in a featured role on Broadway (in Thoroughly Modern Millie).
Millie, All Shook Up, Xanadu, Finian's Rainbow — Jackson's career has been marked by exceptional work in not-on-the-A-list Broadway musicals. Here's hoping he gets star turns in classics, darker shows, Sondheim, Carousel.
He was Out Magazine's "Entertainer of the Year" in 2008.
He played the heroic rugby player in Paul Greenglass's film United 93.
Visit Cheyenne Jackson's Website here.
He's been brought in as a new cast member of the show within a show on 30 Rock.
He worked on creating Xanadu with Jane Krakowski, who then left to do 30 Rock — which led to Cheyenne originating the role, Tina Fey seeing him in it, and Fey deciding that she wanted Jackson on her show.
Charles Isherwood's 3/28/09 review of Finian's is here
"and Cheyenne Jackson (“Xanadu”) as Woody, the local boy she falls in love with under the spell of “Old Devil Moon.”
Snippets from 10 reviews of Finian's Rainbow are here.

Daniel Walters' cover story originally carried the (much better, in my opinion) headline: "How To Succeed in Show Business By Really Trying." Some snippets that were cut:

Cheyenne’s performances, whether as the dumb street artist in Xanadu, the smooth slickster in Finian’s or the TGS cast member in 30 Rock, contain consistent pockets of aw-shucks folksy decency — a core of small town Newport wholesomeness  —bubbling beneath the surface.

So how much of Cheyenne’s booming success is due to his jaw line?

“Well, you realize there’s no right way to answer this question. Nobody one wants to hear Charlize Theron or Halle Berry say, you know, ‘I can’t get cast in the good parts because I’m too beautiful.’ You’ll hear a resounding ‘F— you’,’ from everybody else,” Cheyenne says, “Of course being attractive helps you get noticed. It’s just the way society works …”

But Cheyenne’s not satisfied with mere swoons.

“It’s hard to even be seen as the sidekick or the funnier character because there’s a whole world of character actors that will kill you if you audition for their roles,” Cheyenne says.

[ image from BroadwayWorld.com ]
Bobo the Theater Ho at 11:00 AM