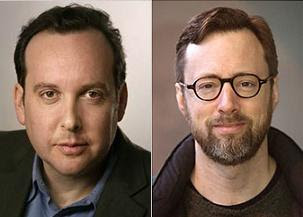 A.O. ("Tony") Scott of the New York Times recently ruminated on the demise of "At the Movies," the Siskel-and-Ebert-inaugurated, thumbs up/down discussion of current films in a format that Scott shared with Michael Phillips of the Chicago Tribune for the past several months, until it was axed by Disney.

Here's a snippet from near the end. Scott is laughing about how he and Phillips would be told they'd have 60 seconds to discuss, really discuss, an entire movie (as opposed to reading off the TelePrompTer). All critics can ever do, he says, is get people to think, to make a claim that people will agree with or oppose.

"And that kind of provocation, that spur to further discourse, is all criticism has ever been. It is not a profession and does not stand or fall with any particular business model. Criticism is a habit of mind, a discipline of writing, a way of life — a commitment to the independent, open-ended exploration of works of art in relation to one another and the world around them. As such, it is always apt to be misunderstood, undervalued and at odds with itself. Artists will complain, fans will tune out, but the arguments will never end."

Writing reviews — even with all the illiterate, uninformed, idiotic citizen-reviewers on the Web, even with Metacritic reducing entire films to a single number — won't come to an end, because it's a habit of mind. We all do it, all the time. We're always trying to figure things out, or should be.

(Scott's partner on the show, Phillips, is one of the best theater critics - and far and away the best teacher of criticism — that Bobo has ever encountered. I had the good fortune to have him as an instructor twice, in 2005 and again two years ago. But viewers don't want to spend the time time with two talking heads anymore.)

Watching movies and going to plays, even for those who do so regularly, has become too much of a checklist activity: "OK, saw A Serious Man, I can cross that off my list now."
When was the last time you saw a movie or play and discussed -- really discussed, at length, with point and counterpoint in the discussion — what you'd just seen? We're all too afraid of appearing naive or too easily impressed. Or something.

Added April 2:
Phillips' response to the show's cancellation -- with a good Fred Willard joke at the end — is here.

[ photos: Scott, left, and Phillips; from amysrobot.com ]
Bobo the Theater Ho at 1:59 PM