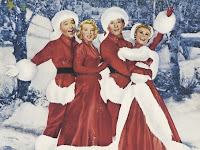 at Spokane Civic Theatre through Dec. 19

Times are tough. You want the holidays to be festive. You want a little escapism.
White Christmas offers escape, all right: tap-dance storms and Fred-and-Ginger waltzing. A torch song that transforms into a lovely duet. The leading ladies parade around in a two-woman fashion show of one elegant '50s gown after another. Amid a multiplicity of well-designed sets, there's one scenic effect toward the end that will take your breath away. And yes, the title song moves from a cappella to singalong in warm, fuzzy, comforting ways.
The muscles and tendons of this production -- acting, dancing, singing, design elements -- then, are quite strong. The show's skeleton, however -- its plot, characterization and dialogue -- have a bad case of osteoporosis.
At one point, an angry outburst -- "That's nothing but a load of guff!" -- provides a good plot summary. Turns out White Christmas doesn't have much at all to do with Christmas: The famous song is just used as a framing device. It'a mostly let's-put-on-a-show sprinkled with the usual boy-gets-girl, loses-girl, gets-girl-again action.
"Oh, that's just old-fashioned escapism," people will say. What's wrong with that? Why not just enjoy it? And over the next several weekends, thousands will -- because this month-long show is already sold out.
Well, escapism doesn't work if half the time (nine out of 16 songs, not counting reprises), the corny-hokey-schmaltz factor has you eyeing your wristwatch instead of watching what's onstage.
The two numbers that are supposed to establish both halves of our love quartet as accomplished performers -- "Happy Holidays" and "Sisters" --come off as vaudeville-cutesy, with the boys in Santa costumes and the girls playing peekaboo with giant blue feathers.
Stereotypes abound -- all blondes are dumb, all men are demonstrably heterosexual, the stage manager (Eric Jeffords, channeling Tommy Tune) is so stressed out. Your eyes may start rolling. Take what Andrea Dawson has to go through, for example, in the Bing Crosby character's love-interest role. She and Kevin Partridge (in the Crosby role) have a whole series of spats, quarrels and tiffs. All night long, she's in and out and in and out and in and out of love. It gets to be annoying.
Still, Dawson does well with the resentful parts of the romantic comedy -- she misinterprets Bob's nervousness for arrogance, and no self-satisfied guy is going to put one over on her -- and in the second-act torch song, "Love, You Didn't Do Right by Me."
Partridge is no Bing Crosby, but he's better looking and better at delivering dry witticisms. Partridge doesn't have The Voice, but then who does? And when he and his tuxedo step into the spotlight for "How Deep Is the Ocean," his love-longing answers her love-disappointment in the evening's vocal highlight.

Most of Act Two prior to that feels like variety-show filler. There's a cutesy "I'm in love" number, followed by a cutesy "we're not in love" number.
When the next song requires a couple to get along, they get along; if not, they don't. One of the worst offenders is "Falling Out of Love Can Be Fun," in which Betty and Judy are dejected over how men are so untrustworthy. Their lines sound almost tragic. So they decide to do a snappy little song-and-dance.
Then there's a drag number, with the boys imitating the girls in a version of "Sisters" reminiscent of the antics at your local Powder Puff football game.. And then the Shirley Temple character came out with shoulder shimmies in a case of adults compelling kids to act like adults, with all the attendant self-consciousness (on the part of the kid) and seat-squirming (on the part of the adults looking on).

Midway through the first act, though, came one of the best things about this show -- called, appropriately enough, "The Best Things Happen While You're Dancing."
The secondary couple have just fallen in love, you see, and things are bustin' out all over. Cameron Lewis and Siri Hafso proceed to provide us with a Fred-and-Ginger moment, with the choreography of director Troy Nickerson (assisted by Jillian Wylie and Kathie Doyle-Lipe) reaching its apogee.
Lewis, with mischievous smirk and raised eyebrows, somehow conveys cleverness and joy all at once: "Look at how good I am, and look at how I got this girl," his actions seem to say. With tiptoe pirouettes and flowing swirls, he's remarkably light on his feet.
Lewis and Hafso waltz and shimmy arms, clap hands and kick, throw in some boogie-woogie moves, move apart and back together, floating across the stage and into each other's arms. It's better than Dancing With the Stars because we've gotten to know Phil and Judy -- they're open and frank about their feelings, not as starched-collar as the main couple -- and because it's emotive dancing (look at how much I'm in love) as opposed to show-off dancing (look at my impressive technique). The two of them are all graceful lifts, curling arms and extended toes. Nickerson, maximizing the romance, adds a vocal quintet and moonlit setting that idealizes the lovers.
Now that's the kind of stuff I can escape into.

Design features are strong. With nine major settings spread across 17 scenes, set designer Peter Hardie ranges from a rustic barn to an elegant cocktail lounge. There's a backdrop featuring a country inn covered in moonlit snow that will take your breath away. (The treetops actually seem to, um, glisten.)
Jan Wanless and her costume crew also work wonders: Every time you look, the two leading women are wearing elegant suits and ballroom-dancing gowns.
The spangles on the some of the tap ensembles' brighly colored vests, however, encapsulate the entire show: Trying too hard to be cheery, they come off as lightweight and insubstantial.
As the old general (who led his battalion with crusty dignity and now runs the inn that's in a cash-flow pinch), Tony Caprile avoids excesses of sentimentality in a heartfelt speech of thanks to his troops (who are seated right where we are). As a tough old broad who runs the Vermont inn, Kathie Doyle-Lipe gets all throaty and pleading in a way that she knows is hilarious in a sexagenarian who wants to get back into show biz. "Put a light on me, I'm like a sunflower!" she squeals, longing for the limelight.

To summarize, then: White Christmas features beautiful sets, detailed and colorful costumes, and some exhilarating choreography.
The score features love duets, gimmick songs, a patriotic chorus, that torch song, a wonderful lullaby and two Christmas carols. An 11-piece band supports two dozen cast members, including the four triple-threat leads.
It's a lot of talent lavished on mediocre material, a lot of overproduced schmaltz with enforced pleasantness.
In his review of the Broadway production two years ago in the New York Times, Charles Isherwood got it right: If what you want is "old-school ... escapism" and" the prospect of singing the title tune along with a bright-beaming ... cast in festive sweaters," then White Christmas will please you. If not, it won't. And some of us aren't so big on festive sweaters.
Bobo the Theater Ho at 9:26 PM