A New York Times article, "Liberal Views Dominate Footlights," has some real dog-bites-man news: Most American plays are liberal. It's so bad that the 10-year project at OSF in Ashland can't find any conservative playwrights.
Could it be that there's no money in writing plays? The fat 'n' happy stereotype about conservatives, while merely a cliche, is a cliche for a reason. Theater thrives on conflict, on wanting to change things, on undermining complacency. Liberals are the rebels who dare to criticize a country when it goes to war, then pick up the pieces after eight years of inept ... oh, sorry. Liberal rant.
Mamet's Oleanna, on the other hand, is cited as an exception: conservative backlash against p.c. run amok.
(And why has "political correctness" been foisted on the left? As if right-wingers don't have their code phrases and thou-shalt-not shibboleths.)
I mean, is the problem (as the article sort of suggests) with the theatrical establishment (a bunch of liberals who won't let righties darken their stages)? Or is it that smart, creative people of a conservative stripe seek out money-making ventures and not the theater? Or that creativity in itself breeds a hankering for tolerance, diversity, ambiguity? (McCain plays, by and large, to people who see a large proportion of blacks and whites in their moral universe, whether the issue is Iraq, abortion, immigration or the free market.)
But why NOT put on *Stonewall Jackson's House*? Why NOT get white audiences squirming about slavery and blacks uncomfortable about the long-term effects of the welfare state and affirmative action? Why NOT examine our premises all the time? Because that's not comfortable. Because in hard times, people just want pacifiers, to be comforted, a bit of an escape.
All the time, Bobo hears people whining, Oh, times are so hard, there's so much sadness in my life, I just want a little escape.
But there's sex, drugs and rock 'n' roll for that, not to mention late-night TV and gallons of ice cream. We all need to tune out momentarily, sure. But why does it have to be for what matters in life, art and entertainment, the hours we carve out to come together and be parts of a community? Why not reserve plays, movies and books for challening (or at least nudging) ourselves?
I've never bought the argument that times are tough, so we should content ourselves with pleasant pablum. When are times NOT tough? (Granted, this now may be tougher.)
But that argument is hogwash. Hard times are the best times to question our assumptions and foment change.
We could do it here.
Spokane should put on the most conservative-viewpoint play that we can find.
And in general, we should seek to put on plays that UPSET expectations. Even if it's just our expectations about how Play Y or Musical Z "has always been done" or "should" be done.
Added Nov. 11, 2008:
Terry Teachout in the WSJ makes the point that liberal or conservative, the playwright's political stance shouldn't matter, because dramatists should pose important questions and then get out of the way, allowing playgoers to discuss amongst themselves and reach their own conclusions. 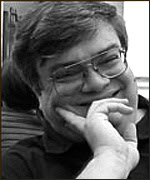