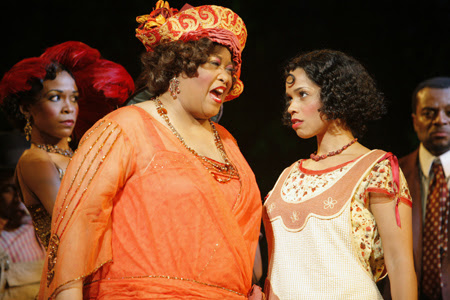 In advance of the preview in Thursday’s Inlander, here are some additional notes and comments on the musical version of The Color Purple — and outtakes from Bobo’s interview with Felicia P. Fields — along with a review …

THE COLOR PURPLE
Differences from the novel in the movie:
Deleted: scene when Shug was singing and walking down the road to her father’s church
Deleted: scene when Celie tries to kill Mister while shaving him
Added: Celie and Shug become lovers
Changed: for the big reunion at the end, they AREN’T in African garb and speaking in the Olinka language.

(Humorous side note: After the three composers of the musical version had failed to find information on the customs of the Olinka, Alice Walker revealed to them that she had simply made up the tribe.)

Broadway musical ran Dec 05-Feb 08 : 30 previews + 910 performances.
Recouped its $11M investment in one year.
Produced by Quincy Jones and Oprah Winfrey (who was Sofia in the movie), among others, including the Weinsteins.
Book by Marsha Norman
Music and lyrics by a team of three: Allee Willis (who wrote “September” and “Boogie Wonderland” for Earth, Wind and Fire, and the theme song for Friends; Stephen Bray (who wrote a lot of songs for Madonna); and Brenda Russell

LaChanze as Celie (won Tony).
Felicia P. Fields as Sofia was nominated for a Tony.
The show went one for 11 at the Tonys in ’06.
Jeannette Bayardelle, formerly in the ensemble, played Celie in Los Angeles.

Premiered at the Alliance Theater in Atlanta in summer ’04.
Sept. ‘04 world premiere.
LaChanze and Felicia Fields were with the show even then.

April ‘07, started national tour in Chicago, with Felicia and Jeannette
Chicago was chosen because of Oprah, director Gary Griffin, and Felicia Fields, all of whom are Chicago residents.
Went one for 11 at Tonys: LaChanze, as Celie, was the only winner.

Fields won ‘06 Theater World Award and was nominated for the Drama League award – she mentioned awards “that I had never heard of before” – like the Clarence Derwent Award.

Felicia Fields on audiences that are attentive but quiet all evening long:
“I don’t wanna wait nearly three hours to find out, ‘Oh, yeah, they were out there, they were listenin’. A lot of times, on my first cross [move across stage], when the drum rolls and I can hear it, I’m thinkin’, “’What are we doin’, paintin’ up here?”
Hell, no! We’re singin’ and dancin’ up here!

Of course, the doubters didn’t think The Color Purple could be turned into a musical. And even a quarter-century ago, when Walker published her novel, the black community bristled at the suggestion that some of its members might be bisexual. Or sadistic.
The men are just monsters. And in ‘85, Spielberg balked at portraying any lesbian love between goddess Shug and ugly duckling Celie.
The musical isn’t graphic, but it also makes clear that Shug likes her love in a couple of different flavors.
Shug Avery comin’ to town!
“They talk about her for about half an hour” before she first enters, Fields says. “You got people talking about her that much, you build up an interest. I always say to the woman playing Shug, ‘I’m comin’ on with some drumstick — you comin’ in on the whole town!”

the title (and first-draft conclusion):
The title phrase becomes clear in the novel (though not in the musical) when Shug says, “I think it pisses God off if you walk by the color purple in a field somewhere and don’t notice it. God just wants to be loved.”
The producers would like you to think that it pisses the performers off if you listen to them sing “The Color Purple” and don’t stand up and cheer. This is a musical about love, y’all.
Amen.

from the promotional video:
Walker, who was skeptical about the musical at first, now says that she wants playgoers to come out and “unshackle themselves” — from them self-doubt that prevents success, from the injustices imposed upon them.

from our interview:
As Fields says, “Musical theater should be an experience. You should be transformed when you leave, been through something that has changed your life.”

Marsha Norman on musicals, in the video:
“There’s a chance in songs to get past the defenses people have.”
(She and Walker won their Pulitzer Prizes on the same day in 1983; Norman, for ‘night, Mother.) (Norman goes on to say, enthusiastically, that songs are the best way to convey the excitement of falling in love and other emotions.)


lyrics used to illustrate call and response:
from the opening number, following “Make a joyful noise” (cut for space):
‘Cause the Lord is walkin’ witcha, talkin’ witcha ...

from the song “Push Da Button” (Shug Avery’s sexually suggestive shimmy-dance in which “kitty,” “button” and “cream” mean exactly what you think they mean):
Shug:
So when tonight you make your lover
Cry out like a lion roar
Tell the neighbors your new kitty
Found the cream it lookin’ for!
Push da button!


Felicia Fields in the promotional video that came in the press kit, on how call and response is fundamental to the experience of The Color Purple in live theater performance:
“I can’t tell you how many nights, when I sang ‘Hell, No!,’ somebody’s talkin’ back to me, OK?”

Can I get an Amen?
Or at least a white person makin’ some kinda noise?


from our interview:
So Fields has lived through a lot of adversity. Maybe she’s not acting much up there?
“My mother says I’m not,” she says, laughing. “It would be a whole lot worse if I was myself. You’d have to have a lot more material ready, because I would have hit Mister a lot quicker. Even Harpo. And the same with Squeak.
The show wouldn’t have lasted very long.”

the fate of Sophia; “African Homeland” as counterpoint to Sofia’s suffering (cut from the print version):
But even Sofia, brash and self-assertive, is subjected to horrifying injustice in this show before Walker’s narrative allows her to regain a measure of happiness.
In fact, during the second-act sequence set in Africa (where Celie’s beloved sister Nettie has gone to live), the injustice of the (fictional) Olinka tribe being pushed off their homeland by white colonizers parallels and provides a setup for the injustice of Sofia being maimed in body and soul just because she sassed a white woman.

Bobo saw this touring version of The Color Purple in Los Angeles in February. Here’s his review. (It was written for an arts journalism institute, a sort of boot camp for theater critics.) The assignment was to lead with an arresting image, an exact detail from the show. The “Other details …” and “Director Gary Griffin …” paragraphs, together, work in another image that Bobo found memorable. (This was our first assignment — 25 of us at the NEA’s Arts Journalism Institute in Theater and Musical Theater — and the effect of the group-think shows, because everyone was eager to demonstrate their critical acuity by bashing this show.)

He has lifted the hem of her dress with his riding crop, leered and slobbered at her, appraised her like livestock. But when Mister seizes Nettie — the dastardly villain assaulting poor defenseless innocence — his grasping fingers appear from a doorway in scarlet light, like a jolt from a cheap horror movie.
The Color Purple (at the Ahmanson through March 9) offers vibrant settings, rambunctious choreography and some soaring ballads in the spirit of sisterhood and self-affirmation. But a surrender to the alternating conventions of melodrama and light musical comedy prevents this saga of sexism and abuse, estrangement and loss from being played for the life-and-death stakes it requires. Every poignant moment, it seems, must be followed by a frenetic dance break or a cackling three-woman chorus. Sisters pledge their fidelity and men declare their undying love — which would be fine and dandy if emotions were allowed to register before break-out-into-song moments rushed proceedings along.
As Sofia — the “hell, no!” fat lady played in the movie by Oprah Winfrey, whose imprimatur this production carries — Felicia P. Fields balls up her fists and laughs at authority with such crowd-pleasing gusto that her example, meant to instruct Jeannette Bayardelle’s Celie, may instead overwhelm her appeal. Bayardelle, tasked with acting abused and robotic for much of the evening, belts out the power ballads by its end, leading to the evening’s predictably triumphant end.
Other details are more successful. Broad green leaf fronds against gingham, for example: In a dream sequence that transports Celie to Africa and reunites her, if only in imagination, with her beloved sister, the contrast of sedate American frocks with regal African robes evokes the long journey toward self-affirmation that Celie travels in this trying-too-hard-to-be-inspiring show.
Director Gary Griffin nicely interweaves the two worlds of Celie’s hopeful visions and harsh reality, deploying white-clad African émigrés trudging across the savannah in a tableau that’s broken by forlorn, slump-shouldered Celie pacing toward the audience, at cross-purposes with her ancestral people.
It’s an effective sequence. Too bad that the musical version of The Color Purple is at cross-purposes with its emotional tenor, presenting us with prefabricated emotions instead of embodying Celie’s triumphs.
&&
Marsha Norman’s book hews close to Alice Walker’s novel, but with the burden of translating into melodramatic action what was quiet pathos in Celie’s letters to God.

The songs were inspiring in the moment but not memorable afterwards.
Bobo the Theater Ho at 3:47 PM