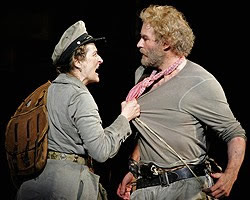 It'll be awhile until it comes out on DVD -- and it'll never appear on a big screen in Spokane, but John Walter's documentary about the Central Park production of Brecht's *Mother Courage and Her Children* apparently provides footage of La Streep working her way toward a characterization (and Tony Kushner on a bicycle, too). It's called "Theater of War."

[ photo: hotreview.org, with Kushner interview ]
Bobo the Theater Ho at 11:15 AM