Outtakes ‘n’ Stuff
from the Carrie Cimma (Mrs. Lovett) interview
for the John Doyle production of
Sondheim’s *Sweeney Todd* (at the Fox, Dec. 14-15)
[ preview of the show is the Arts Lead in the Dec. 11 *Pacific Northwest Inlander* ]

Note that the lead image in the Dec. 11 Inlander pictures Merritt David Janes as Sweeney.
Janes played the title role in the first-national-tour production of *The Wedding Singer* that visited Spokane in November 2007.
Back then, Bobo had a fun interview with Janes. Sample exchange:
Could your mullet beat up Adam Sandler’s mullet?
Well, my mullet is from Vermont and his is from New Hampshire. So it’d be an all-New England battle.
Since the *Inlander* archives are all FUBAR, be the first to e-mail michael@inlander.com and receive your own forwarded copy of that historic interview. (There was even some discussion of Madonna’s having filmed scenes at the Bigfoot.)

But back to Sweeney …
Ben Brantley dropped a great allusion into his Nov. ’05 review of the Doyle-directed Michael Cerveris/Patti LuPone production, calling it
“Marat/Todd”
— which of course refers to Peter Weiss’ 1963 play,
*The Persecution and Assassination of Jean-Paul Marat As Performed by the Inmates of the Asylum at Charenton Under the Direction of the Marquis de Sade,*
which is much better known by its shortened title, *Marat/Sade* (and which not a single person at Inlander HQ recognized at all). 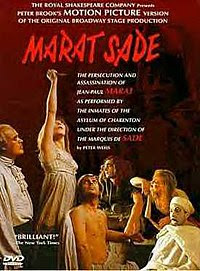 So all that, and Bobo couldn’t use it.
Bobo has seen a production of *Marat/Sade,* but can’t remember where – it was a college show (nice, big cast), and now I think it must have been at UCLA, c. 1985.
The point of contact is that both productions take place inside insane asylums, with some questioning of who’s running the asylum, who’s actually sane and insane, etc. Buckets of blood, throat-slitting in bathtubs (or in barber chairs), etc.


OUTTAKES: CARRIE CIMMA INTERVIEW
Cimma, who plays Mrs. Lovett, was also in last year’s touring production of *The Wedding Singer.* Visit the "Sweeney on Tour" site — and click on "Photos" for the best images of this production.

Effect of the Johnny Depp movie of a year ago?
Carrie Cimma: “The movie has helped with name recognition. We opened in September, and a lot of twenty-somethings have come out to see the show because of it.”

Mrs. Lovett even has tweener fans:
“There was this one little girl, 8 or 9 — NOT the recommended age for this show, by the way — and she came to the stage door and her mom said she was really shy. So she leaned over halfway and said, really loud, ‘I want to be HER!’”
“I don’t know how I feel about that,” says Cimma, laughing.

Why Mrs. Lovett’s instrument is the tuba:
“Patti LuPone is the reason that all Lovetts have to play the tuba. In New York, they told her, ‘Don’t worry about it.’ And she said, ‘Absolutely not. I’m not going to be the only one who’s not playing an instrument. Besides, as a matter of fact, I once played the sousaphone in an all-girls marching band.’
“Since that happened, everyone playing this part has to play the tuba.”
Cimma herself played “some brass, a little French horn” in high school.
“It’s the most expensive prop I’ve ever had to work with.”

How much of a musical background were the actors expected to have?
“Clearly, we’re meant to act and sing first.
“Our Johanna, aside from being a beautiful singer, is on full scholarship at school. I don’t know what school she goes to, but she’s on full scholarship for both vocal performance and cello.
“Our Beadle has played the piano for 30 years. Our Toby plays four instruments. The judge plays three.”

on acting and playing an instrument:
Playgoers says that they “sort of forget [that each of them is lugging around an instrument] and that they’re drawn into the story.”

Director John Doyle, says Cimma, just finished *Road Show* at the Public with Michael Cerveris and “with a lot of people from *Company* and from *A Catered Affair.*”

How much contact did the cast have with John Doyle?
“Adam John Hunter, who was the assistant director and PSM on Broadway with Doyle, works directly with us.
“J.D., as we call him, stopped by for a couple of days right before we went into tech and talked about the concept.
“Hunter would be sending Doyle photos of costume designs, since of course Doyle had to approve everything.”

Doyle’s first production in England:
“Halfway through the rehearsal period of the first production — this was in a little 219-seat theater, and they were doing it just to try to get some money so they could go on —one day, Doyle said, as they were plodding through, ‘I looked around and said, “Oh, dear, this is actually working.”’”


more on “symbolic” coincidences in the show:
“And it’s funny, lots of things that people think are so clever about this production, came about because of absolute coincidence.
“A lot of the things that people think are funny and so clever, were out of necessity. People ask, ‘Why is Sweeney moving furniture at this one point between scenes?’ Well, because he’s the only person who’s not playing an instrument at that point ...
A lot of the show is open-ended like that, as if we are making up the story as we go along.”

on the buckets of blood:
“What we were told was, when this is set, sometime around 1910, in asylums they would have operating tables, and at each corner there would be a bucket to catch the runoff blood.”
Lovely.

on the stark set:
“We have this big wall with all these knickknacks — bedpans, straps, whatever you’d expect to find in an asylum. An entire wall of bric-a-brac.”

Lighting setup:
“Our electricians are spectacular. Our crew spends eight hours doing set-up before the show, and six of those hours are for the lighting.”

Isn’t it just a blood-and-guts show?
“I tell people that it’s also a love story — Sweeney’s love for his wife, Mrs. Lovett’s love for Sweeney ...”

Cimma is playing the Angela Lansbury / Patti LuPone / Helena Bonham Carter role:
“I’ve listened to Lansbury’s recordings, but I never saw her. As for Ms. LuPone, I made a point of not watching her. I wanted to approach it with the role fresh in my head. I want to go in with nothing preconceived. So I didn’t find the ‘grand dames’ helpful.”

about cannibalism on stage:
“Even in the movie, even in the traditional staging, they’d kill someone and the audience is going, “Look at all the fake blood.’”
“But one thing that I actually liked about the movie was when they’d kill people, and all the bodies were dropping down into the pit of the basement, even though a lot of people were turned off by that.
“But in the movie, they could show what they were really doing.
“Our show is more eerie. It’s creepy, very suggestive.”

Doyle’s inspiration for this version of Sweeney involved German cannibalism online:
“Doyle told us about the article that inspired him to do the show: Some people in Germany were volunteering online for cannibalism — they were actually asking to be cooked and eaten, on this German Internet site. And he said that when he saw this article, it was so creepy, and then he knew he had a reason to do this show.”
Related BBC articles:
here and
here.
And Der Spiegel has an interview.
And The Guardian has a graphic account of the night of the murder. It’s like Hannibal Lecter come to life (or, to the table).


on Sondheim’s use of the Dies Irae and leitmotivs:
“Oh, that’s in ‘The Ballad of Sweeney Todd.’ That’s our Greek chorus moment. The ballad is when we drop everything and are just flat-out singing to the audience.” “’Epiphany’ has Johanna singing her song proper, and then a lot of other times, you hear that theme. Johanna also has “Green Finch,” which pops up in other places.”

Favorite moments?
“’Little Priest’ at the end of Act One, and my death — it’s pretty fantastic, so I can really open up and let it roll.”

When it comes to her family, Cimma gets no sympathy;
“My family came to see the show in Hartford,” she says. “And they were, like, ‘You’re so mean. We feel bad for Toby.’”
But what about watching you die, Carrie? How did they react then?
“They said, ‘You deserved it.’ Oh, OK. Thanks, Mom.” [laughs]

Bobo just wants to add that Doyle's *Company* (which he saw on PBS and which had this same "gimmick" of the actors carrying and playing their musical instruments during the performance) was one of the handful of most moving productions that he has ever seen in musical theater. But then that Raul Esparza fellow is so darn cute ...
Bobo the Theater Ho at 4:14 PM