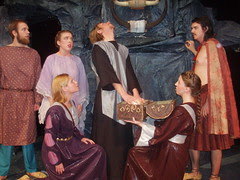 The oracle reveals Hermione's innocence
Originally uploaded by Sir Andrew Aguecheek
Russo has worked to make Shakespeare's late play about jealousy, false accusations, the damage that older generations can do to younger ones — and forgiveness -- more accessible.
He has trimmed the text and eliminated the character of Autolycus altogether. He is rotating six actresses into the three female leads -- Queen Hermione (unjustly accused of adultery), Paulina (her advisor, seemingly unforgiving but actually full of compassion) and Perdita ("the lost girl," spurned by her father as a bastard [bastardette?] and, later, growing up incognito as a happy shepherdess whom everyone keeps suspecting is a sho' nuff princess). And Russo has added a "ravisihing scene" -- a dream sequence, prior to the action, that will have the effect of making King Leontes's suspicions that his wife has slept with his best buddy, King Polixenes, just a tad more credible.

Russo has set the production in a "post-Greek, pre-Christian" era. Leontes turns into a hunting fanatic, which explains the motif of horns on the set and helps guide the audience into an awareness of how "horns on the brow" connoted cuckoldry for Shakespeare's audience. (Leontes, in his compact, late-period Shakespeare ramblings, often seems more worried that he has been exposed in public as a fool who can't control his "property," his wife, than as aggrieved husband who has "lost" his wife's affection.) Russo was delighted about one discovery during rehearsal: Leontes bewailing how his reputation as a cuckold would demean him -- just as he was standing under a pair of longhorns that are part of the set. (Lobby displays explain cuckoldry and other topics.)

Four choreographed dancers will appear often in the action -- horned and undulating -- surrounding Leontes as he awakens feverishly during a dream in which he imagines that Hermione has betrayed him and gone over to Polixenes' bed.

Even by Shakespeare's standards, *WT* presents convoluted, intricate language. Russo started rehearsals back in September to overcome just this obstacle, and he has been working constantly to "theatricalize" the language -- getting his student actors to accompany their lines with actions that help illustrate meaning to audiences who, let's face it, probably haven't been studying *WT* extensively before arriving at the theater.
For example, the two royal friends do some playful wrestling in the opening scene, just to reinforce the sense that they're longtime pals but also somewhat competitive with each other.

Lobby displays also include student collages and rehearsal photos. Shakespeare aficionados will recall that in the famous final statue scene, Shakespeare mentions a near-contemporary visual artist for the only time in his works: Giulio Romano (1492-1546; this play dates from about 1611), known for his verisimilitude.
Check out Romano's "Seduction of Olympia by Jupiter," which has some of the same freaky, animalistic sexual desire that Russo's trying to hint at in the opening dream sequence.

Russo is alternating two sets of three actresses, and he notes, for example, one Paulina is more sensitive while the other is more angry. That's borne out by the collages in the lobby: One Paulina regards her character as a wise counselor, a pillar of fortitude, a swift avenger while the other seems to concentrate on how angry Paulina is at the macho tyrant, Leontes.

The cast had master classes with Richard Digby Day of the London Dramatic Academy, who at one point said, "Oh, Brian, it's all just spoken opera, isn't it?"
So why see such high-falutin' stuff? Because it's about forgiveness. We've all made mistakes with long-lasting consequences. It's no use thinking that we get off scot-free -- the consequences don't simply vanish -- but it is possible, through genuine contrition, to make amends. (For a Catholic school, production, this is starting to sound like the sacrament of Reconciliation.)
Bobo the Theater Ho at 5:09 PM