*The Doctor in Spite of Himself* at NIC 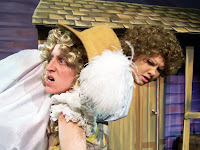 Bobo: This play is always identified as Moliere's attack on quack doctors. But isn't the satire broader-ranging than that?
Joe Jacoby: The satire is broader-ranging than that. Doctors are a favorite theme of Moliere's, but he has something to say about sincerity in general here. The father loves his daughter, but doesn't seem to notice or care about her happiness. Sganarelle loves his wife but doesn't recognize that showing her disrespect communicates that he doesn't love her. The young man in love with the daughter is the character with the most integrity, sincerity, and honesty, since he returns to ask for the daughter's hand properly (albeit after he has received his inheritance).

How do you direct *Three Stooges*-style slapstick comedy? Please discuss a particular scene in which it's proving to be a challenge to extract comedy from violence.
The most difficult scene here is the scene where Sganarelle beats his wife, and when a neighbor intervenes, the wife suggests that she might like the beating and runs the neighbor off. We're stylizing the violence, using slapstick, and making it obvious that they don't make contact. We're providing Martine the means to surprise Sganarelle but also to get interrupted by the neighbor, and we're hoping that the neighbor is played comedically enough that the audience can laugh at the scene. Whether we've succeeded here is, of course, up to the audience.

The mute girl's being forced into an arranged marriage. But our society doesn't really do those anymore. Isn't that a stumbling block?
We aren't treating it as a stumbling block because in the world of this play, a forced marriage seems to be such a strong reality. While the father's judgment is questioned at one point, his authority is never disputed.

Which translation are you using? You could've chosen more famous Moliere plays. Why this one, and why now?
We're using an adaptation by Timothy Mooney, who has a great deal of experience with Moliere's plays. He tours a one-man show called *Moliere Than Thou* that played at Whitworth last spring. His version uses rhymed couplets, and that device restores some of the wordplay lost in translation from the original French to English. Also, this version embraces both the wit and the earthiness of Moliere. We hope that our production does the same.
The reason for this play is the opportunity to work with the physicality of characters. Moliere's *commedia* influence is more plain here, and with the slapstick style, the actors get to work on a well-written play that calls for them to think about how they're using their bodies.

Any discoveries you've made in rehearsal? A scene that's most complicated in terms of direction?
The most complicated scenes happen during Act II and III when people are talking to each other, and not much action is suggested. We're trying not to impose "bits" into the scenes while still trying to exploit the comic possibilities. We think that we've made some discoveries that respond to that issue, but we won't know for sure until we're in front of an audience. I always want to make sure that we tell the story clearly first. The danger with plays like this is that self-indulgence is so seductive, and actors don't always realize that they've been seduced. Finding comic moments that are not only fun for us in rehearsal but fun for the audience as well is a difficult challenge. The best comic moments are funny because they're truthful to the character and the situation. These characters are exaggerated, and we're trying to let them be as exaggerated as they want to be, while still being grounded in the reality created for them by Moliere. If someone can't figure out why they're doing something, we stop immediately and try to come to a clearer understanding of the scene and what the characters need.

Anything else you want to emphasize about this production?
It's going to be somewhat bawdy, in keeping with the script.