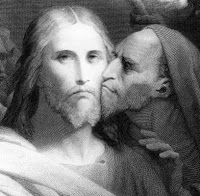 Two nights left on *The Last Days of Judas Iscariot* at GU's Jepson Center. (Fri-Sat at 7 pm; see Feb. 18 post below.) You should consider going to see it. It's free. Director Kevin Connell has cut a 2:40 play down to 1:10. It's well acted. Scripts are in hand, but large swathes are memorized. Actors are costumed, and they make entrances from all over the house. It's irreverent as hell -- there are a couple of lines so shocking and blasphemous that the audience just went quiet -- but Guirgis' play will make you rethink, not just your attitude toward biblical accounts but your whole notion of forgiveness. It feels much more like a full production than most readers theater shows. Oh, sure, there are weaknesses -- a couple of characters "act black" because apparently those roles were played by African-Americans in the premiere, including ghetto expressions that seem ungainly coming out of the mouths of white Zag undergraduates -- but this is a mere quibble. Connell has directed inventively, his actors are living their characters' problems, and it's a remarkable study of how moral absolutes (Mother Teresa, perfect; Judas, despicable) are merely labels. All this, and one of the main visual effects of the entire show simply didn't function at all on opening night. Plus no basketball game to conflict with, so the last two shows should be even better. It's laugh-out-loud funny but also profound, and it's short and free. You can go out later and be decadent -- just like Satan and Judas talk about in this fine production.
Bobo the Theater Ho at 11:18 AM