*No, No, Nanette* at Spokane Civic Theater 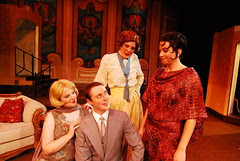 *No, No, Nanette*premiered on Broadway in 1925 and played 321 performances; revised by Burt Shevelove in 1971, played 861 performances and won four Tonys (actress, featured actress, costumes and choreography). It ran for two years and brought Ruby Keeler back onto the stage after 41 years
The ’71 adaptation was by Burt Shevelove, who’d had a success in 1964 by co-writing the book of A Funny Thing Happened on the Way to the Forum (with Larry Gelbart).

Rosie O’Donnell and Sandy Duncan appeared in the NYC Encores! production in May 2008.

Supposedly, this is the show that caused the Curse of the Bambino, when Boston Red Sox owner H.H. Frazee sold Babe Ruth to the hated Yankees just to finance this dumb ol’ show. (At least that’s how Boston fans see it. In fact, the 1919 precursor to this show is the one that Frazee needed to finance.)

In the plot, Sue and Jimmy Smith forbid their bubble-headed protegée to head off for a weekend in wicked Atlantic City (hence the title).

Jimmy Smith, a millionaire Bible publisher, is married to frugal Sue.
They just want their ward (adopted daughter? protégée?) Nanette to be respectable.
Nanette has other ideas.
She’s engaged to Tom Trainor, who has a lawyer-uncle, Billy Early.
Jimmy, meanwhile, is the sort of guy who just wants to be happy — and he likes to see other people being happy, too.
So the naïve schmuck (never thinking that his wife would mind), bankrolls Betty in Boston, Winnie in Washington and Flora from Frisco.
This leads to complications — namely, the girls are now expecting more and more money.
So Jimmy hires Billy as a fix-it man.
Billy tells Jimmy to cool it by going off to Philadelphia.
Billy arranges to take his nephew Tom down to a little place that the Smiths have just outside Atlantic City — Chickadee Cottage — there to discuss matters with Betty, Winnie and Flora.
Guess who else decides to take a vacation at Chickadee Cottage?
Two other pairs of characters: First, the wives (Billy’s wife Lucille and Jimmy’s wife Sue) – since their husbands are “away,” you know.
And then, of course, we’ve got to find a way to get Nanette to Atlantic City. (Whenever she asked, she was always told, “No, no.”)
So of course her own guardian, Jimmy, takes her. (He didn’t really want to go to Philadelphia, anyway – and besides, what would be the harm?)

Well, when everyone collides at Chickadee Cottage, there’ll be plenty of harm. For starters, the husbands (Jimmy and Billy) are gonna have some ‘splainin’ to do.