opening-night review of *The Belle of Amherst* 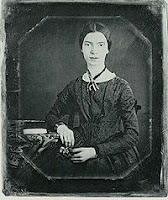 Emily Dickinson was ahead of her time, sure. But then she was ahead of ours too. We don’t read enough to be verbal; she’s nothing but. We expect to be happy and entertained all the time; she knew that happiness arrives, at best, intermittently. Like some kind of hyper-articulate and contemplative nun, she knew how to live in silence and observe nature; we stomp on silence with cell phone chatter.
Two hours' worth of poems and talk, talk, talk about poetry? A tough sell. But in Ellen Crawford’s masterful performance of William Luce’s one-woman play, *The Belle of Amherst* (at Interplayers through March 14), there’s a wide range of emotions: spiritual longing, fascination with God’s creatures, even sexual passion. Crawford’s Emily is, by turns, mischievous, self-assertive, irreverent, resentful, infatuated, sly, coquettish, rebellious, sarcastic and yearning. She mocks the “prim starched ladies of Amherst” and their “dimity convictions”; she mocks herself.

It’s just Crawford alone onstage with some Victorian props — no visual excitement here, so it’s all down to the words. But Christopher Schario has directed with energy, twirling Crawford and running her around so as to take advantage of Interplayers’ extreme thrust stage.

Yes, there’s a sense that you’ve spent a couple of hours in the presence of that slightly odd and more than slightly chatty spinster who lives down the street. But especially in the second act, when Dickinson’s thoughts about unexpressed passion and death predominate, Crawford’s performance repeatedly underscores how the reclusive poet — the lonely, passionate human being — decided by sheer force of will not to dwell in grief (so many deaths, so many unrequited loves) and instead rush to take refuge in words.
It’s a little creepy, in the way that a nerd intellectualizes experience, shuns strong emotion and hides behind a wordy veneer.
But Crawford, while making Dickinson’s love of language palpable — she lingers over “phosphorescence,” she makes a revolving playlet out of “circumference” — also makes clear that what underlies all the energy and zest is disappointment and death.

Crawford recites Dickinson’s poems — since they’re short, there’s time for a lot of them in this two-hour show — in a raspy, oratorical, eager manner and at a rapid clip. And she keeps the energy high. For example, in telling how Emily went to hear Jenny Lind, Crawford’s impersonation of the Swedish Nightingale goes from operatic to sarcastic in an instant. Later, while reciting one of the spiritual-yearning poems, Crawford makes transitions from thunderous voice to dipped-chin wistfulness to intense contemplation — all in the space of just three lines.

Luce’s 1976 play, meanwhile, provides explanations for the weird-spinster-in-white reclusiveness: a possessive sister, unattainable suitors, Emily’s willingness to thumb her nose at Amherst society by playing the role and enjoying the game.
And the dramatist places poems in speculative contexts (“Success is counted sweetest” after being rejected for publication, “Wild nights! wild nights!” imagining the unconsummated love of her life). The result? Making the poems come alive in new ways.

Quibbles? Sometimes the monologue’s changes of topic seemed too abrupt, though you might write that off as reflecting Dickinson’s quicksilver mind. At the top of Act Two, Crawford overdoes the coquettish nervousness while practicing how she’ll greet the distinguished editor who’s about to pay a visit.
In addition, no one doubts that Dickinson had irreverent and passionate thoughts, or that Luce needed Emily to have an outgoing, theatrical personality to keep the interest up for an entire evening. But I seriously doubt that the historical Dickinson was anywhere near this forthcoming. Still, once you accept the premise of this engaging, fictional Emily, Crawford’s performance constitutes seduction by thought-process.

You’ve been through so many emotions during this visit to Aunt Emily’s house that by the final moment, when she leaves to go do some more baking, you’re sad to see her go.
Meanwhile, Crawford’s Emily has been opening her arms wide and embracing the light, plunging into possibilities even as she knows that life will find a way to undercut her plans. She delivers an acting class up there, folks — one so good that, by the end, you’re sorry to see Crawford go too.

Next week’s shows on Wednesday-Friday, March 4-6, have been cancelled so that Crawford can fly to L.A. to film the finale of E.R. She will still perform both scheduled shows on Saturday, March 7. The show’s scheduled to run through Saturday, March 14; there’s a possibility of an added matinee on Sunday, March 15.

[ photo from Wikipedia: Daguerreotype of Emily Dickinson in 1846 or 1847, when she was about 16; this is the only authenticated image of her after childhood. ]
Bobo the Theater Ho at 12:33 AM