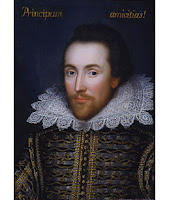 Shakespeare scholar Stanley Wells has revealed what he believes to be a 1610 portrait of The Big Shake himself: not the dodo-bird of the Droeshout portrait, but a wise and handsome fella who's quite proud of his elaborate lace collar.
In 1604, for a year or so, Shakespeare rented a room in London from a family of French emigres named Mountjoy. Their family business? Making elaborate lace headdresses for wealthy ladies.
Not only is it a better-looking portrait -- it suggests that Shakespeare had ascended from farm-town boy to wealthy property owner. The disgraced glover's son had gone off to the big city and made good. Too bad he only had six more years to live.

Remains of the 1576 gathering place known simply as The Theatre have also been excavated, according to a BBC report. The Globe wasn't built until 1599, so this is where Shakespeare himself would have acted in the premieres of plays like *Romeo and Juliet.*

For Stanley Wells' smackdown of Mark Rylance, Sir Derek Jacobi and all who think that "Shakespeare didn't really write those plays," go here.

ADDED on April 3, 2009:
Ron Rosenbaum in Slate on why Will's looks aren't relevant to what matters: interpreting his plays and sonnets
Also: Katherine Duncan-Jones says that Stanley Wells is wrong because, well, the portrait is of Sir Thomas Overbury and not Shakespeare at all.
Bobo the Theater Ho at 10:19 AM