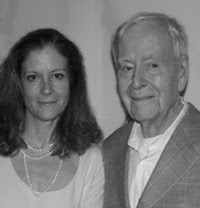 For promotional reasons, the Tony presenters naturally include actors of currently running shows that might perhaps benefit from a little mention on a certain CBS show on June 7 that's we all know is only watched by geezers, gay men and theater hos like your very own Bobo. Take names like Fonda and (Colin) Hanks, Graham and Platt -- they're in, respectively, 33 Variations and Guys and Dolls, so of course they get selected to present. But I just want to say -- Hallie Foote -- daughter of the Man, I only know her by reputation, she's supposed to be great in "Dividing the Estate* but THAT'S who I wish we could see more of.
And as for scenes from plays -- for a four-minute scene, they could be re-staged and shot for TV in a way that wouldn't feel like single camera filming from 50 feet away.

[ photo from theatreinchicago.com: Hallie and Horton Foote ]
Bobo the Theater Ho at 4:29 PM