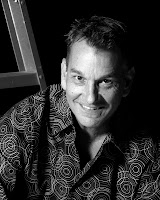 Tom Heppler is currently appearing as Marcus Lycus in A Funny Thing Happened on the Way to the Forum at Spokane Civic Theatre (through Sunday). He works as the administrative assistant to one of the executive VPs at Sterling Bank.
{ Bobo note: After a whole series of e-mail snafus and malfunctioning tape recorders and -- oh, you know, just life getting in the way -- this interview is finally appearing, four months (!) after I first sent questions to Tom. So you'd better enjoy it. Or else. }

In 1976, I saw my first real show. We had season tickets to the Golden Gate Theater in San Francisco, and we saw A Chorus Line. I was about 20. We got the better of the two casts that were doing the national tour at that time — in L.A. and San Francisco, we got Donna McKechnie. My sister and I sat in the third tier, way up high, and I was blown away. My sister said, "I don't know what was more fun — watching the play or watching you.

What kind of theater did you do in high school? And in college?

I was going to community college in the Bay Area and doing a business major, but I kept switching to the theater classes. And my report card came home and my father asked, "What the hell are you doing?"
I knew I wanted to major in theater. I checked out Sanford Meisner, Lee Strassberg -- and they only sent two students a year
Well, I didn’t get that, but I asked the instructor, could you get me in the summer class at the Neighborhood Theater, a six-week summer program. And for the full year, I got in myself. I was 22.
I liked the Playhouse: it was three hours of acting, an hour and half of voice.
I had gotten into UCLA and UC Irvine and Juilliard, but that experience is what made me into an actor. It was a two-year program, and they cut from 100 kids down to 25. Well, I didn’t make the cut. That’s when I learned that theater is political. But there were amazing people in my class: Amanda Plummer, Chris Noth....
Other than theater, what are your hobbies?

Gardening. I have five acres up by Mount Spokane High School.

What’s coming up now?
Not much. [laughs] My trees are going up. But even though I’ve lived up there for 10 years now, the coyotes and the moose and the deer — they scare me.
And I do woodworking I restore furniture, but I haven’t had much time for that lately. Just for stuff around my house.

You have tremors, shaky hands. What’s your diagnosis and prognosis?

I’ve gotten so that when kids ask — and kids do ask — I tell them it’s because I eat too much Jell-o.
And their eyes get big, and they’re satisified with that.
It’s just a family characteristic that comes from my father’s side of the family. Sometimes I make it do that for a character I'm playing, and it's funny — sometimes onstage, they won't shake when I want them to, and I have to make it work.
Most inspiring place you’ve visited outside the United States?
Venice, Italy. It's incredibly charming. Like the Bay Area, it's all built on landfill. There are entire towns built on piers that are still there after hundreds of years. All the first floors are shut off because of flooding. The people are beautiful and the city was amazing, but very dirty.
My favorite place right now ... next October, I'm going to Egypt to cruise up the Nile, a 17-day cruise. I've tried going to Egypt three times before, but the State Department shut down the visas.
Why the interest in Egypt?
It's where civilization started. I've always been fascinated to see that part of the world.
Let's change topics. For someone in your life, you’re not as good a friend as you should be. For some other individual, you’ve been a really good friend. Discuss.

Who’s your hero? Do you have any former heroes who, for you at least, have fallen off their pedestals?

"Heroes" -- I don't really like the term. I mean, these sports people or actors or politicians, and everyone regards them as heroes ... I just don't get it. Anybody can be a hero in the situation -- the mom who lifts the car off the kid.

What mildly (or wildly) popular activity, sport or pastime holds just about zero interest for you personally? Why?

Tell me a little about Harding in Cuckoo’s Nest. Your performance is wonderful. What discoveries about him have you made in rehearsal? How much has the part been cut for the one-hour competition version?

This is the fifth one I've done. For a competition show, the director cuts it down, then runs it, then cuts it down some more. It usually takes three cuts to get it down to its essence.
Then you have to learn all the lines again, sometimes from a different point of view, because the dialogue that supported that transition earlier is not there. So you come up with different character choices.
I never audition for a show that I don't want to do.
For example, I auditioned for Harding while I was in costume and makeup for Ali Hakim upstairs in Oklahoma! But I just wasn't getting it. I wasn't focused. And it wasnt until the third time that it clicked. Yvonne even said to me at one point, I didn't think you were going to get it.
Diana let me read for both parts in Lonely Planet. That's the only show in which I've kept open, doing and changing things all the way through. It was never dull.
React to the following in whatever way you see fit, Tom.

Bowen’s reviews are too long. They’re too snooty. He plays favorites. He has little understanding of Aspects A, B and C of theater. He shouldn’t single out individual performers for criticisms. He’s too easy to please. He’s way too negative. He fixates on little details. He talks too much about theater in the abstract. He has a funny mustache. He’s too bald. I don’t like the way he breathes.

Oh, reviews ... everybody says they don't read them, but they read them.
It's just your opinion, or Jim [Kershner]'s opinion.
It's odd, in no other profession do they have anybody reviewing them publically.
But it's all just part of the gig. I don't take them that seriously.

Another sticky wicket – this time, about this very blog. What’s your reaction to the following?

Comments on this blog go through me. I reject about 10 percent to 20 percent of them. My criterion: If a comment is purely negative and personal, it doesn’t get in. If, however, it’s critical of an individual but also raises a valid opinion about a show or a performance, then I allow it to be posted. For technical reasons and for the foreseeable future, apparently, anonymous commenters on this blog (as distinct from the Inlander Website in general) will be able to remain anonymous and won’t be required to register with a traceable pseudonym like “Spokane Theater Nut.”

I don't like all the negative comments on the blog. People are uglier when they're anonymous. They'll always be competive. There will always be jealousies. But I don't like it when they get into the personal stuff. I mean, Are you really gonna go there? And besides, if you don't like the personality, you can still like the work. Actors are very egotistical and very insecure ...
... no?!
And sometimes, we don't edit ourselves [laughs].
But I don't read the blog much. I don't have a computer at home, and I'm on the damn thing all day at work, so I don't really care. We all rely too much on technology.
Think of “funniest backstage moments that I’ve experienced or witnessed in Spokane theater.” Now spill. (You can leave names out of it, but we hope you won’t.)
In Death of a Salesman, I was playing Bernard, and I had a lot of downtime. So I’m down in the dressing room, eating tortilla chips, and I hear Melody [Deatherage] over the intercom, and I realize, ‘Son of a bitch, that’s my cue!’ So I haul ass upstairs, and I make it exactly on time. And Melody gives me my line, and when I start speaking to her, I start spitting tortilla chips all over the stage.
Was it so the audience could notice?
No, I don’t think so. But Melody sure noticed. And I’m thinking, ‘What are you gonna do to hide it?’”
... to be continued ... (as you can probably tell from the formatting alone, assembling this interview has been a bear ...)
Bobo the Theater Ho at 6:52 PM