an interview with Steve Booth 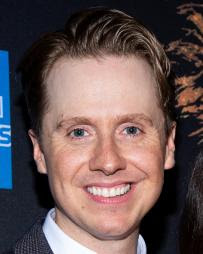 (by phone from Dallas, 3 June 09; headshot from broadwayworld.com)

Steve Booth attended Lake City High School in Coeur d’Alene and then went to UNLV on a theater scholarship. He’ll be playing the title role in Joseph and the Amazing Technicolor Dreamcoat (at CdA Summer Theater, June 13-27).
Booth has been on the road for the past six months with the musical version of Happy Days. As a result, he’s missing the first week of rehearsal in CdA.
You read that right: The actor singing the title role in CdA’s first show is flying in on Sunday and joining the rest of the cast on Monday morning, June 8 — just 130 hours before the curtain goes up on opening night.
Yikes. At least it’ll be a fun homecoming for Booth, who has lots of family and friends in the area.

In the summers of 2002-04 at Coeur d’Alene, Booth appeared in Anything Goes, West Side Story and Oklahoma!; Smokey Joe’s Café and Fiddler on the Roof; and Cats and Little Shop of Horrors.
He performed in the Las Vegas version of Avenue Q (he played Princeton and Rod), then returned to CdA three summers ago to play the title role in Pippin.
This is his first summer back since.

on Avenue Q:
Steve Booth: We had 10 shows a week, but two casts. So we did five shows a week — we covered for one another within the company, then were on standby for four of the other cast’s five shows every week.
Bobo: But God, living near the Strip … I hate that town.
Steve Booth: I know what you mean. But having gone to school there and doing Avenue Q — I kind of have a soft spot for Las Vegas.

Bobo: So what happened with *Glory Days*?
[from a phone interview on 5/2/08 with Bill Booth, Steve's father:]
Roger [Welch] came to see it in New York. Steve did an off-Broadway show called "Journey to the West," and five or six shows at the Paper Mill.
Glory Days was done at Circle in the Square, which seats about 700.
Steve plays Will, who opens and closes the show. All four characters have been away to college, but Will is the one who wants them to stick together. It's the night before the football alumni game; none of them made the team. He wants it to be the same among them, but it can't be. At the end, Will isn't sure what to do with his life.
One character has a big secret; Skip is the cynic, who's jaded and cynically aware; Andy is passionate, cocky, has a strong sense of self, but also a softer side
But it closed after 17 previews and just one night on Broadway [5/7/08].

[ IBDb.com entry here.
Glory Days: book by James Gardiner, music and lyrics by Nick Blaemire ]
Steve Booth reflects on his *Glory Days,* a year later:
Unfortunately, some bad decisions were made by higher-ups. We rushed moving the show from D.C. to Broadway. In D.C., it had gotten rave reviews and sold out.
It was a tiny little show, just four characters, so we went into it with small expectations and were pleasantly surprised.
Circle in the Square was a perfect size for this show -- a 3/4 thrust stage, so it was an easy transplant.
It opened up, and we made the move real fast.
But all of us actors -- who's gonna say not to go to Broadway? It was our dream. We were sort of flying by the seat of our pants.
The smarter move would have been to take some time, workshop it regionally a bit more. It's not a perfect show, but it's a good one.
But everything moved so fast. I think the producers didn't raise enough money so that, if it wasn't an immediate hit, they'd be able to keep it afloat until word of mouth helped it out.
As it was, they were banking on it coming to Broadway and getting rave reviews.
It could have gained a following; it could have earned some creative nods -- you know, some nominations or something.
But the kids that wrote it -- it was harder for them [for the show to close on opening night]. It was very hard for all of us, but it was harder on them. They'd been writing that thing for a couple of years.
Nick Blaemire was also appearing in *Cry Baby* at the same time.
It was a learning experience for them.
You know, I got my Broadway credit, but when it closed that fast, my first thought was: "Darn, we didn't get to record a cast album." So that's why I'm excited: right after Joseph, I'm going to New York and we're going to record it for Chickaboom Records. [sh-k-boom Records; sh-k-boom.com]
So it's not dead -- it was sold to NPI, and it's being done a lot in Japan. This Japanese boy-group, kind of like the Japanese version of N Sync, they're doing it a lot.
And Glory Days will be done in high schools -- it's an easy, cheap show, with just four guys and good stories.
We should have gone off-Broadway after we were done with D.C.
[photo: cast of Glory Days, with Steven Booth as Will, on right; from jessepjohnson.com]

on preparing for Joseph:
Bobo: Did you watch Donny Osmond in the film, or are you one of those actors who studiously avoids watching previous performances of the same role?
Steve Booth: To tell you the truth, I wasn't that familiar with the show. I've never seen it onstage.
I've seen some clips of the movie. It's great as a reference point.
But I don't expect that Roger is just going to copy that thing. He'll have his own ideas.
I am not Donny Osmond. But I have listened to the music. I'm learning it on my own without watching the movie.

Roger is letting me come to rehearsals a week late. And I'm a little scared about missing the first week of rehearsal.
I mean, it's one of the leads, along with the Narrator. But the staging and the choreography -- it's not that hard, as long as I know my music.
Joseph is in his little skirt and he just sort of walks around -- there's not too much dancing for him.
I'm confident that in a week, I'll be able to get it.

On Sunday [June 7], we have two shows here in Dallas, then I'm getting on an 11 o'clock flight, and by Monday at 10:00, I'll get started on Joseph.
It's gonna be hard, but I have my book and my iPod, and I'm going through the script and highlighting everything.
I might make little notations where I might have ideas, where we might a little twist in the score, but I can't make a lot of choices. Mostly, I just need to be put into the show.
Roger has done this show before. It's not a new show to him. It'll be easy to work with him and with everyone who I know [in CdA]. It'd be a lot harder not knowing anyone. But then I would not have gotten the role if I did not already have relationships with people there. I have the confidence to pull it off.
I told Roger, anytime, I will come back. My whole family is there, so I get to see my family.

on the *Happy Days* tour:
We're in our second week in Dallas now. We started in October in L.A. We did it there to the end of November, then were on hiatus for a bit. So we've actually only been on tour since January, in Milwaukee.
This is my first tour. Some people like living out of a suitcase, but I like to be more settled.

[photo: Steven Booth, on left, as Richie in the musical version of *Happy Days,* with the Fonz and Ralph]

Bobo: Upcoming projects?
Steve Booth: Nothing for sure. I've been invited back to UNLV to do Company.
They bring in conservatory guest contracts to put past graduates on the main stage. I've never done any Sondheim, so I'm excited.
Then, at the end of August, I'm not sure, but I'm going back to New York. My plan is to go back to the city and do albums, get into classes. I'm all about bettering my work and saving money on tour.

Bobo: When did Roger offer you the part of Joseph?
Steve Booth: I think in late February, he brought it up and then in April he told me I was in.
Without the first week of rehearsal, I'm nervous.
Idaho was my home, but now New York is. I'm eager to get back to auditioning, but this worked out perfectly -- things are kinda slow now.
I'm 28 now, and it feels good to get back to my family.
I'm happy where I am in my career, even though I was late getting into theater.

I love to do it, and it paid for my college. But it wasn't until later that I thought I could make a living at it.
It's hard to feel like I'm an adult, even now, because I'm so passionate about it, and then, in the next second, I've got nothing.

I look at my dad, who is a businessman, has a regular 9-to-5 job. And he provided for us. I don't know that I'll ever have that. But I always know that I love to perform.

In high school, I just didn't know. In fact, the first show I was ever in, my girlfriend at the time was in it, so I auditioned.

My senior year at UNLV, I did a couple of musicals -- The Last Five Years in our black box and Floyd Collins on our medium-size stage -- both at the same time, and I was overwhelmed, but I do remember how much I loved it.

I wasn't just a theater kid -- I did sports and band and tried a lot of things. And I'm still learning -- I want to take classes. It has not stopped being exciting.

Bobo: And in New York, have you had to wait tables?
Steve Booth: I got lucky -- I haven't. Out of UNLV, I went to an open call for Avenue Q -- it wasn't an Equity call. And I got called back, and then the day after, I flew to New York, and then spent three months staying on people's couches, trying to make it as a non-Equity actor.
And then they flew me back to Vegas with full creative, and I worked as a caddy on golf courses, just put all my chips into making it -- it was a long, year-long, arduous auditioning process for *Avenue Q.*
But by flying to New York twice, that allowed me to go out and look for agents. So I got an agent out of it, and I saved a lot of money, so I was able to move to New York, where I've been lucky, getting little gigs, enough to keep me afloat.

Bobo: But now you're performing in front of the home crowd.
Steve Booth: "That's the funnest part, to do it for an audience, and my family gets to see me and have a fun time. To have my family there."

on touring with Happy Days:
“Being out on the road lately — people just aren’t coming. It’s a bit depressing to be giving 100 percent of yourself to a show, and the people aren’t there."

on CdA Summer Theater:
"Roger always hires great people. It's always fun -- I have not had a bad experience there. It's not a job where you make tons of money, but it's fun."

on what opening night for Joseph might be like, after just six days’ rehearsal:
“Come Saturday night, I may be a like a deer in the headlights, but they can push me around — if I’m in the wrong spot onstage, they can just push me into the right spot.”
Bobo the Theater Ho at 2:15 PM