*In a Grove* review

The "Four Japanese Ghost Stories" of In a Grove add up to a tedious 90 minutes; I can't recommend this show. But there are a few bright spots, and the various areas of deficiency are the kinds of things that beginning actors can learn about.
This is student theater; it's a training ground; it's not yet ready for the prime time of public exposure, except for friends and family of the cast members.
But you have to appreciate the efforts of director Adam C. Sharp and his cast -- they accomplished some good things, and they have enthusiasm for the same things that theater-lovers love.
Sharp designed a simple but effective set: paper lanterns, branches, rocks, Japanese scrolls, tea lights, long skeins of fabric (simulating snow) against a black backdrop. The lighting was eerie when it needed to be. Sharp himself, up there in full view of the audience, supplied percussion, vocals and some freaky sound effects; the show's sonic presence was a real strongpoint.
Sharp directed well, bringing villagers down the aisles to surround us, planting the narrator sometimes in the audience, sometimes appearing from behind a screen or from the wing opposite where you thought she might be.
As for the acting, there were some teachable moments. (On the other hand, Kendra Meredith, who plays the narrator-figure, Obasan, was very good and expressive. Still, I gather that the cast has lots of first-time actors who can capitalize on their varied ethnic and national backgrounds to bring extensive cultural knowledge to a production like this, which is Japanese and universal at the same time.) 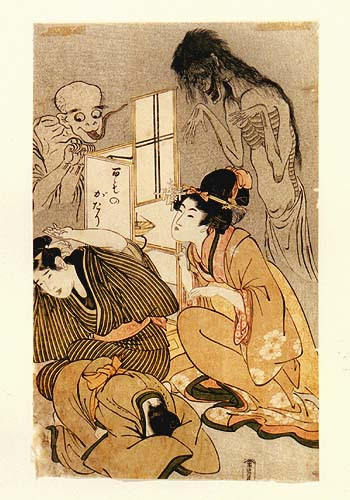 Don't act with your hands. Yes, a hunched-over body with pleading hands bobbing up and down does characterize your mood. For a while. Don't overdo it. Sometimes self-pity and desperation can be in the voice, the eyes. Basic stuff: Know your character's objectives in every moment. And if you're called on to portray fear, jealousy, cruelty ... then think back to the time when you yourself felt (or witnessed) genuine fear, jealousy, cruelty ... and mimick what you recall. (What does Bobo know? He's no acting instructor. But dammit, you can do better. And I just wanna hug you for being as enthusiastic about theater as you are -- it takes some guts to get up onstage in public like this. But you're in it now, and there are thousands of years of theater tradition behind you. So honor the tradition; do it proud. And whether you end up still doing plays 20 years from now or not, you will have learned self-confidence, cooperation, memorization, nuance ... stuff that will help you as an actor, Realtor or jet-fighter pilot. [Maybe Actor should be capitalized all the time, the same way they insist that Realtor needs to be. Just a random thought.])

Remember the impression your character is trying to make.
Don't laugh with nervousness onstage (unless the character you're playing is having a chuckle). And don't stand all in a line. If you're in a foursome who are mostly listening to one other character speak, walk out around campus and study people who are talking in small groups. The leg-shifting, the eyes wandering, the arms defensively crossed, the polite smiles and little self-primping gestures — study those and imitate them.
If your character is written as desperate to learn something, act like it; don't look bored or distracted.
Volume. Projection. Talk to people in the back row.
Of course you're self-conscious onstage. But if they've put you in an unusual costume -- say, fright wig on your head and branches for hands. Don't fixate on the costume or makeup or props and call attention to them by writhing around. Make another choice: Make a choice to convey the emotions the script calls for. You're supposed to be ominous, scary, creepy. Waving arms connote "maniac." You're not a maniac; you're a scary old legendary snow-lady. What if you remained motionless, deepened your voice, and lasered-in your eyes so that they fixated on nothing but intimidating the hell out of that poor guy? The costume is just a means to an end, not the goal itself.

Clear, genuine dialogue can be more effective than flailing physical movement.
One scene presents the three Oni demons. Are they supposed to be scary, or the Three Stooges? It wasn't clear. Coble apparently wants both, which is asking a lot of any actors. You had to admire the somersaulting, growly-voiced high jinks of the three SCC actors -- but maybe less is more here, too. Maybe less movement, combined with really hitting the sarcasm vocally and playing the jokes straight (as if they were serious, not absurd) could have improved this scene, which was very difficult tonally.
My notes, I now realize, read, "Comic zombies bickering over whether to eat other zombies' brains." Is that close? Was that the goal? (Personally, I gotta say, I've never liked zombies, don't get the attraction at all. But plenty of people, especially today, er, eat 'em up. So ARE the Oni demons like zombies? If so, clarify your goal: What impression are you trying to make on the audience?
No conflict equals tedium.
Something's got to be at stake. If not, it's just chatter.
And the way that scene resolved with the daikon root? Left me scratching my head. But that's Coble's fault, not yours. Maybe daikon roots are as common as spaghetti dinners over in Japan, I don't know. My own cultural ignorance; but it sure fell flat for me and at least two other audience members (who I overheard wondering about the same thing, right at the start of intermission).
Even in children's theater, children don't want to be talked down to.
Maybe I'm missing Coble's point: the singer who has to sing for 48 hours straight? Silly. But maybe kids will giggle. It's hard to be ridiculous and scary all at the same time. At least the sarcastic asides and pop-culture references, delivered especially well by the evil landlord and his henchman, created some enjoyable humor.
Undulating bodies under flimsy veils don't look creepy. They just look silly.
There were these three young women gyrating around with wispy shawls. It was distracting. Very, very distracting.

Why did the monk have to keep singing?
She doesn't sing well. Give up and de-musicalize her lyrics into regular spoken dialogue. That way, we won't wonder all through the scene why she's being put through such torture instead of being allowed to bring out the scene's emotions.
Keep the pace up.
Clap hands, run lines at hyper-speed, whatever. But don't let the action lag. In the fourth story in particular, the comic/creepy juxtaposition would have been helped if only contrasting moods had been crashed into each other more quickly: Keep it moving, folks.  The whole get-food-from-the-scary-flesh-grinding guy sort of worked out like a Japanese trick-or-treat tale. But the joke was set up at great length, tediously, and then the smirking tone at the end seemed to trivialize the demise of the entire village (which we supposed to regard portentously throughout). So what is a playgoer supposed to think at the end? It was all tonally muddled, IMHO.

Scaring people onstage is harder than in the movies. I've been scared by plenty of movies, but seldom in the playhouse. I've been startled and momentarily creeped out by plays, but the sensation fades quickly. That's because of logistics: If the severed head doesn't pop up exactly on cue, if the ghost is visible in the wings before making an entrance, the spell is broken. It's the willing suspension of disbelief: I'm willing to believe that that woman over there is Viola and we're in some made-up country named Illyria, and if she forgets her lines or fumbles a prop, it may even add to the humor, and no harm done, because she's not trying to threaten me. But if the creepazoid monster or ominous otherworldly omen suddenly stumbles, or enters too soon or too late, or coughs, the illusion's broken, and I'm no longer scared: That's just Phil Myers over there in the werewolf suit.
Coble's script makes matters worse by aiming at both creepiness and chuckles. Tell me if this is just one of my blind spots, folks -- horror-comedy seems to be a minority but persistent genre that some people seem to enjoy -- but I feel that you just can't do both. Comedy, by and large, makes you feel superior to the people onstage; ghost stories and horrific characters are supposed to make you fear for your own safety -- acknowledging, in effect, that somebody onstage is bigger and more powerful than you. Lurch back and forth between spine-shivers and quiet smiles, as Coble's play does, and I feel whiplash -- manipulated one way, then another.
Which is a long-winded way of saying that the tonal shifts in Coble's script set awfully high standards for the SCC students. And they don't have the skills, yet, to reach them.

Sharp, who teaches film and theater at SCC, is holding the student-produced Bigfoot Film Festival on March 6 and then a multi-media production of 1984 (from May 21-30). If we believe in the value of theater as an educational tool (for the participants at first, when they're just starting, then for both the cast and crew AND their audiences, when they get more accomplished), then we should approve of what theater instructors like Sharp are doing all over the world in little out-of-the-way high schools and colleges. They keep theater alive. Glee is the Hollywoodized, mass-media pinnacle of what's going on all over the country.
So, no, the SCC acting troupe isn't yet ready to win the national championship; they're sort of playing in a flag football league right now. And it'll take months of work -- but Sharp and his crew can hope to start playing tackle, and then competing, and then winning a few, and then winning a lot. Right now, he has to keep explaining that no, he doesn't teach theater at SFCC. But wouldn't it be great to have a third high-quality community college theater program in this area, in addition to the ones already at SFCC and Coeur d'Alene's NIC?
[image: Japanese ghosts and demons in an early 19th-century print, from asianart.com]
Bobo the Theater Ho at 8:46 AM