*The Prime of Miss Jean Brodie* at EWU

[Maggie Smith in the 1969 film; from ferdyonfilms.com]

Nov. 13-21; directed by Sara Goff
at the University Theater (on Washington St. on the EWU campus in Cheney)
adapted by Jay Presson Allen in 1966 from the 1961 novel by Muriel Spark

In 1930s Edinburgh, at the Marcia Blaine School for Girls, students (ages 10-16) follow with fascination the outspoken, assertive, flawed Miss Brodie. But one of the girls will betray her.
Vanessa Redgrave won an Evening Standard Best Actress Award in London for the role; Zoe Caldwell, a Tony; and Maggie Smith, an Oscar (for her performance in the 1969 film). 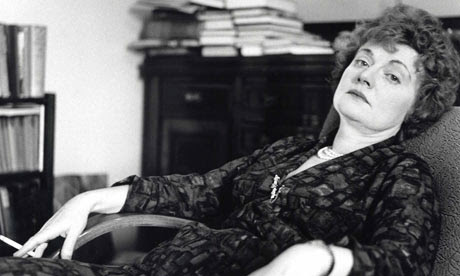 [Muriel Spark in the '50s; from London's The Guardian]

From an e-mail exchange with director Sara Goff, an assistant professor in Eastern's Theater and Film Dept.:

Bobo: How did you solve the problem of 20-year-old students appearing too old for middle-school age girls (ages 10-18 in the novel) and too young to resemble a Maggie Smith-in-the-movie kind of woman?
Sara Goff:  The age of the characters is hard to translate to an audience in a college production — not only the age difference between the students and the teachers but also in the girls themselves. They play 10-year-olds in Act I, 14-year-olds in Act II, and 16-year-olds in Act III. But I think if the acting is good the play will work. So I focus on what I can do something about — making the dramatic action believable.
I also worked closely with our costume designer, Jessica Ray, to deal with some of these issues. As the girls age, their silhouettes become more and more defined — also, hair and makeup helps. But again, I really believe audiences forgive a great deal as long as the acting is good, and I think the performers are meeting this challenge.

Why'd you choose this play? (Because it has a large cast, lots of women, good moral ambiguity, and deals with issues close to the experience of adolescents?)
First, I select plays that move me, plays that excite me. I am seduced by Brodie and my heart bleeds for Sandy. The play is provocative and sexy and ripe with conflict. The Prime of Miss Jean Brodie fires my imagination. In addition, it's an actor's play.
Second, I was committed to doing a large-cast female show. I have a cast of 14 women and four men.

What scene or design element is most distinctive?
I was really inspired by beauty and history of Edinburgh, and Brodie is obsessed with art and anything Italian, so I wanted to highlight those things in the design. Don [McLaughlin, EWU's technical director] constructed a towering arch with columns — that’s my favorite design element. It has all kinds of sculptures carved into it — it’s beautiful.

Why not just rent the DVD?
I’m a soldier of the theater. For me, there is no comparison. If I saw a woman being painted in the nude in a movie, I wouldn’t stir; and yet, if I saw the exact same woman being painted two feet in front of me on the stage, I would be on the edge of my seat.
Theater is about community and immediacy. I had seen Frankie and Johnny and String of Pearls at other theaters, and yet I saw them again. I’m really upset that I missed Doubt, even though I saw Cherry Jones play Sister Aloysius. There aren’t any surprises when I watch a film adaptation of a play. But I never know what I’m going to get when I go to the theater, even if I’ve seen the play several times. It’s dangerous, and I love that.