*Take Me Out* review 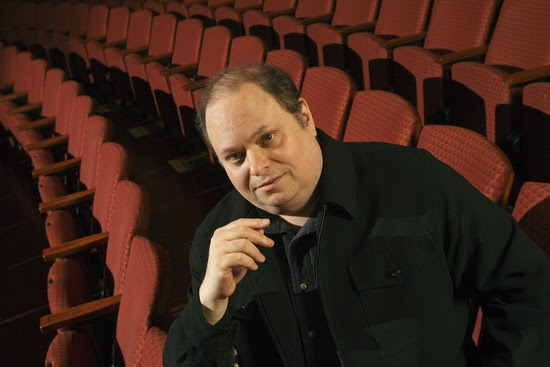 Only one performance remains (Friday the 13th at 10 pm) and rumor suggests that Gonzaga's Magnuson Theater will be packed. (Donations requested.)
Kevin Connell's more-than-just-semi-staged readers theater presentation is good enough that you wish these nine guys (yes, nine, in a baseball play) could take a few more weeks to rehearse and mount a full production.
Richard Greenberg's play takes on such important, resonant topics -- race, gender, sexuality, class, wealth, non-communication, the National Pastime -- that it deserves to be heard and studied and discussed. Connell stages it effectively, with game sequences in slo-mo simulation, and a shrine to baseball shining up front, and everybody wearing Empires uniforms with their names on the back, and hunks drawing gasps as they stripped to their waists for simulated shower scenes.
Yeah, even if you're not listening all that closely, it's a crowd-pleaser.
Let's start with possible improvements. Diction has to improve by tomorrow night: It's been awhile since I've heard so many dropped final consonants. (The A/C and some over-loud music intro's drown out some bits of dialogue, which is too bad, because Greenberg writes witty repartee.) Projection and volume can be a concern with nearly every character. Laugh lines and significant lines were stepped on in half a dozen places: The cast needs to let the emotional hammer (or tickle of laughter) register with hearers before actors start rushing into the next line.
But these are small flaws, fixable if only this could go on to a full production.
It's remarkable how much of this play the cast has already memorized -- given all the stage business that Connell has engineered, scripts just have to be discarded momentarily.

Everyone will want to hear about the star (played here by a real-life star). Well, Darren Lemming's name is ironic -- Lemming is no follower -- and Steven Gray mostly lives up to the role's demands. He could one-hand his script instead of clutching it with both hands for dear life in some sequences, but he's got the self-assured, lazy coolness of a standout athlete who knows that he's a standout. (Just like Darren; just like Gray himself.) Gray's natural smirk (all this is a joke, right? he's just goofin' on ya) serves him very well for most of the 80 minutes, when Darren IS amused by the all the gay men fawning over him, the rookie who, he says, "am in awe of you." But in the later, darker, more disturbing episodes, Gray's smirk did him a disservice -- Darren's more somber by then. Still, watching Gray act is like watching what college SHOULD be all about: jocks demonstrating that there's more to them than jockdom, that the arts matter too. Gray's engaging, funny, narcissistic, violent, sobered. You won't come across many life-imitates-art opportunities like this performance.
The cast was solid. Bing Blalock, for example, brought the uncomprehending hillbilly rage that's required in the show's bigoted John Rocker character. But the most exciting find in this production is freshman Andrew Garcia in the gay accountant role of Mason Marzac: gangly, fey, bubbling over with baseball mania, star-struck, drunk, ranging all over the stage even as you sensed that his character just wanted to crawl up inside himself and stay there.

Bobo directed this show once at the Civic, also as readers theater, and I gotta say ... in nearly every respect, this show's better. A tip of the baseball cap to "bat boy" Kevin Connell and his cast and crew -- and a wave to everybody who's thinking of rounding third and charging into Magnuson tomorrow night. Come on home and get taken out of yourself. Take Me Out offered a consistently engrossing 80 minutes.

Postscript: Connell announced in his curtain speech, among other upcoming Gonzaga productions, that the next readers theater project there, in February, will be a semi-staged version of To Kill a Mockingbird, in conjunction with The Big Read (the NEA-sponsored national program which encourages entire cities to focus on a single American classic for a month) and that late March will bring "Greek Week" (historians and others illuminating the customs of 2,500 years ago in conjunction with Connell's own production of Aristophanes' sex-strike-and-giant-phalluses comedy, Lysistrata.