*Romeo and Juliet* at EWU: preview with director Jeff Sanders

Jeff Sanders, who’s directing Romeo and Juliet at EWU’s University Theater (March 5-7, 11-13), is married to assistant professor of theater Sara Goff. For more than four years, he acted with the Cincinnati Shakespeare Company, an Equity acting company in which, in addition to roles in King Lear and other Shakespeare plays, he also performed in three separate productions of Romeo and Juliet (as Mercutio, as Prince Escalus, and then — tripling roles in a daily educational outreach touring show that had only half a dozen actors in all — as the Prince, Paris and even the Nurse). He has worked his way up from adjunct professor to full-time lecturer in Eastern’s theater department.

The following is an edited mashup of interviews by phone and e-mail. 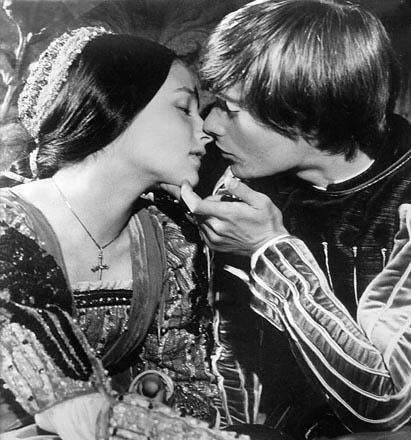 Bobo: So why return to Romeo and Juliet? Aren’t you sick of it by now?
Jeff Sanders: It’s such a humbling bear of a play. It’s kind of like Our Town — everyone thinks that they know it, but it’s so difficult to pull off.
He’s not excessively demanding on the actors who are playing the roles he played, mostly because he didn’t specify which roles he had taken, just that he’d been in the show professionally.
“I’ve been most sensitive about Juliet, just because I think she’s one of the finest creations in Shakespeare,” he says. “If the ensemble were polled, they’d say, ‘He’s really big into that Juliet role.’ But that’s because, for an act and a half, Romeo goes off to Mantua and has pina coladas.”
And then there’s that great irony in the play, when she takes the potion and goes under like death [at the end of 4.3], he enters and relates his beautiful dream, in which he dreams "my lady came and found me dead — ... / And breath'd such life with kisses on my lips/ That I reviv'd and was an emperor" (5.1.6-9).

Bobo: How much of the text have you cut? rephrased? rearranged?
Sanders: Quite a bit. I have no idea how a full text version of this play could be “two hours traffic." However, we have it down to two and a half hours with intermission. The are some surprises to the cutting and rearrangement of the script that I think will be provocative to audience members no matter what their level of familiarity is with the play. But it would be buzz-kill to ruin the surprise, so you must come to the theater.

Bobo: What's the chief way in which this R&J is distinct from all the many other R&J's that have ever been performed?
Sanders: It’s dark, hip, and provocative. We use classic Italian Renaissance silhouettes blended with contemporary gothic fashion to create a world that is both classic and contemporary. The show charts the distance between Shakespeare’s time and our own.

Bobo: What's the set design like, and what ideas are you trying to convey with the set?
Sanders: First, I needed it to be functional for Shakespeare’s play. I wanted lots of open space with areas that could be defined in many different ways. I didn’t want scene changes — you can hear in the text how each scene springboards into the next — so I wanted a space that could help drive the play.
Also, I was attracted to having something that was once beautiful but is now decaying because the “ancient grudge” has taken its toll. Also, I see R & J as a corrupted world filled with hate and violence — and in the midst of this darkness, something incorruptible is born. The reason Shakespeare says “There never was a story of more woe” is because something perfect dies.
Shakespeare would be pretty surprised that we sit around and read plays silently. The Elizabethans said that they were going to hear a play, not see a play.
Tybalt will be very striking-looking. The Capulet side will be more goth, with more makeup and crazier hair. The Montagues will show more skin and be earthier.
Without billboarding the Capulet-vs.-Montague thing — I don’t want this to become black vs. white or Israel vs. Islam — I wanted to create a world that is dark and decaying and corrupted — and out of that, something incorruptible is born.
The image that I shared with our designers was two torches in the darkness.
Sanders acknowledges the influence of Sofia Coppola in Marie Antoinette — “how she mixes classical with contemporary in both music and clothes.”

Bobo: We don't have arranged marriages anymore. So isn't R&J more of a cautionary tale against teen suicide than it is any kind of statement about parent/child relationships?
Sanders: I think we like to make this play about teen suicide because it’s a hot-button topic of today. For me, I think Juliet looks at suicide like a Roman falling on his sword — it’s an honorable testimony to her Romeo. I like this idea because it gives her strength and doesn’t victimize her.
Parent/child relationships have a great influence on this play but in a surprising way. Friar Laurence is really Romeo’s father and the Nurse is really Juliet’s mother. Romeo and Juliet's parents are always confused and left in the dark when it comes to the children because they have no idea what’s going on. And due to this distance, they react emotionally, irrationally.

Bobo: What's the Queen Mab speech about? And how are you staging it?
Sanders: For the Elizabethans, "queen" (or "quean") meant "a degraded woman, a harlot." Mab is the fairies' midwife and helps give birth to dreams. Mercutio is a hard-core sexual realist and characterizes love as nothing but fantasy brought about by an evil hag fairy who comes to men and women in their sleep and plants these vain fantasies.
Elizabethans thought of fairies as evil little creatures who could do you grave harm — when it came to fairies, they didn't think of Tinker Bell.

Bobo: You’ve had a lot of experience with the play. Did anything surprise you during rehearsals?
Sanders: Yeah, the importance of hope in the piece, especially in the second half. With all young actors, the temptation is to play it tragic, because we all know how it turns out. But I keep saying, ‘Don’t play the tragedy before it turns tragic.’
Shakespeare is a master at sprinkling in hope. At any moment, this train wreck may not wreck.
So in Act Three, scene two — the “Gallop apace” speech, Juliet is waiting for news of the massacre, and she’s ready to kill herself. And the Nurse says, I know where Romeo is. And it’s a light bulb moment of hope. I want to have the actors really believe in that.
Or when the Friar is breaking down this building that is Romeo, and he’s a mess — and he adds, “Hello, my comfort is revived by that.’
It’s one thing to say that aloud. It’s another thing to feel it down to your feet.

Bobo: We all have an over-idealized view of the star-crossed lovers — impossibly attractive, incredibly articulate, hopelessly in love, tear-jerkingly tragic. It's an ideal that no production, not really, can attain. So why even attempt it? Isn't R&J, as one of his early, very poetic tragedies, better when read and studied than performed?
Sanders: In my estimation, nothing can touch a theatrical event. Shakespeare was meant to be performed. These plays were never written for a desk but for a theatre. Seeing an actress take on Juliet’s poison speech is a thrilling event that can’t be touched in a classroom. I want to hear her breathe — I want to see tears well up in her eyes. Nothing can touch the immediacy of theater.

Sanders also points out that while colleges may strain to cast middle-aged and older parts, that Prince Escalus can be almost any age, and that Lady Capulet, Juliet's mother is only 28.

Sanders and EWU are also working hard to sprinkle some Shakespeare magic on the younger, non-graybeard crowd: An Intro to Lit course with 300 students this quarter is coordinated with the production, and a morning performance on March 12 for high school students is already sold out.

[ photo: Olivia Hussey, 15, and Leonard Whiting, 18, in Franco Zeffirelli's 1968 film — still the most commercially successful Shakespeare film of all time. Hussey was not allowed to attend the London premiere, because the film contained glimpses of nudity. That would have been, by the way, her own nudity. ]
Bobo the Theater Ho at 6:52 PM