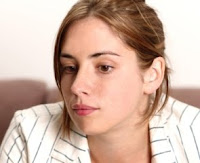 Lucy Prebble's inventively (gaudily?) staged play about an American financial crisis (no, not last year's -- the one from a decade ago) is closing quickly on Broadway, despite being a success in London.
('Muricans don't much like having snooty Brits poke fun at our red, white and blue shortcomings, evidently, along with our other moral failings.)

Some take-aways from Michael Billington's analysis:
1. Musicals can be expressionistic, but plays should be realistic. This is not only false, but it endangers theater's future. Serious, or serio-comic non-musical plays that use dream-like, imagination-prodding theatrical effects are the future. Let movies do spectacle and novels grab individual readers — but you-are-there, psychological immediacy ... that's what theater can deliver like nothing else.

2. And two points from near the end of Billington's article:
"If Enron's melancholy saga proves anything, it is Broadway's irrelevance to serious theatre. ... at heart, Broadway is a big, gaudy commercial shop-window, where fortunes are won and lost."
What's commercial isn't cutting-edge. What isn't cutting-edge will be lost — in a generation, possibly two — to oblivion.

3. Chicago is generating more exciting theater than N.Y. (In general, a tip of the cap to America's regional theaters.)