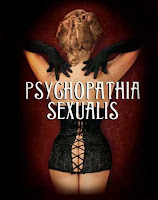 Arthur (Dan Anderson) is getting married to Lucille (Caryn Hoaglund-Trevett). Problem is, he can't perform sexually unless a pair of his father's argyle socks are in view.
Having counseled Arthur about his problem, Dr. Block (John Hart) decides to try some shock therapy: He just steals the damn socks.
Arthur enlists his friend Howard (Damon Abdallah) for help; Arthur has a gossip-monger wife, Ellie (Bethany Hart); high jinks ensue.

Ben Brantley's Feb. 1997 review in the New York Times concentrates on the centrality of the Dr. Block role (played then by Edward Hermann) and compares the comedy's witticisms to those of S.N. Behrman, Nichols and May, and early-'60s Woody Allen.

[ image: from compasstheatre.com — from a production a year ago in San Diego ]
Bobo the Theater Ho at 2:59 PM