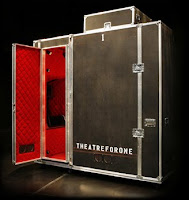 If we really mean it when we preach the impact of live, up-close-and-personal performance, then why not follow the example of what they're doing in Times Square?

Obviously, with their air conditioning and gasoline generator and glassed-in performance area, they've got a bigger budget than we, the 91st-biggest radio market in the nation, might be able to manage.
But what if somebody scored a) a confessional from a Catholic church about to be dismantled, b) a new Dumpster, c) one of those double Porta-Potties, d) a two-sided enclosure that some hardy local actor with carpentry skills devised?

Just dream with me a second: the Civic and/or Interplayers gets the permits to set up on a sidewalk somewhere near Post and Riverside, or else in Riverfront Park. It has the aroma of something slightly risque, like a peep show, only it's perfectly legit. Think of the curiosity it would arouse: Me, too! Me, too! And it plays right into the current fashion for reality-TV, you-are-there, no-bullshit, WYSIWYG entertainment.

The payoff? Somebody told me once that an event needs to enter a prospective playgoer's consciousness six times before he or she will actually make the decision to attend. This could count for a couple of those pings. A Lake City actor in an enclosure? Makes passers-by just a bit more likely to attend, the next time they hear of a Lake City show....

Sandy Hosking and Bryan Harnetiaux could start churning out one-person scripts. Local actors would be able to add a line to their play program bios.
And the critics? Sorry, fella -- there's no room. We're sold out.
Bobo the Theater Ho at 3:07 PM