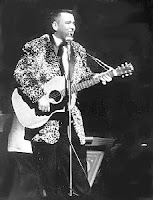 Brian Gunn, Jhon Goodwin and Paul Villabrille will headline as (respectively) Buddy Holly, the Big Bopper and Richie Valens in the Civic's production of Buddy: The Buddy Holly Story (Sept. 24-Oct. 24).
The rest of the cast list is here. Michael Hynes will play Hip Pockets Duncan; new Civic music director Jim Ryan will also appear onstage as one of the Hayriders and as Jack Daw, leader of the Songbirds.
Yvonne A.K. Johnson will direct, with Michael Saccomanno and Jim Ryan sharing the music-direction responsibilities. Choreography will be by Troy Nickerson and Jillian Wylie. Tia Woolley will produce and stage-manage.

A review of an April production in La Mirada, Calif., is here. Apparently the book's not much, but the songs are wowza! I don't know about you, but I plan to re-watch the Gary Busey film just as soon as my Netflix queue cooperates.