*Death of a Small Town in the West* 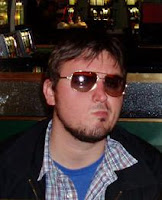 Ben Olson's original new play — a satire about Sandpoint — showing on
Fridays-Saturdays, Aug. 20-21 and Aug. 27-28, at 7:30 pm
at the Panida Theatre in Sandpoint, Idaho
Tickets: $12; adult audiences.
In Olson's own words:
In this "comedic satire, ... an infamous land raper moves into town and bribes the city council into letting him bulldoze the entire town and recreate Sandpoint from scratch, making it a full-blown kitschy resort town. This, as you may imagine, pisses off a gang of locals, who decide to plant bombs on all the three bridges surrounding Sandpoint and create an island community, not allowing anyone else in.
"There are musical numbers, singing land rapers, whiskey-fueled plans of sabotage, drunken city officials, villains with eye-patches, meaningless deaths and maybe, just maybe a little bit of social and political commentary that might live beyond these four nights."
Bobo is reminded of an exchange between Wesley and Emma in Sam Shepard's Curse of the Starving Class:
W:  I'm not staying here forever.
E:  Where are you going?
I don't know. Alaska, maybe.
Alaska?
Sure. Why not?
What's in Alaska?
The frontier.
Are you crazy? It's all frozen and full of rapers.
It's full of possibilities. It's undiscovered.
Who wants to discover a bunch of ice?
Bobo the Theater Ho at 5:10 PM