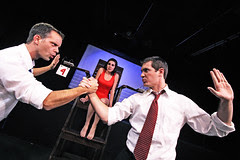 Spokane Civic Theatre
Originally uploaded by Sir Andrew Aguecheek
What follows are outtakes from a recent conversation with George Green, who plays Bill in "Never Swim Alone" at the Civic — in other words, this is some of the stuff that Bobo had to cut out of Thursday's preview in *The Inlander.*

‘SWIM” USES MORE SPACE
"We're always working the X and trying to get angles" in "Graceland" (which he's directing), says Green. "But 'Graceland,' set at a temporary campsite just outside Elvis’ mansion, feels more constrained in movement. But ‘Never Swim Alone’ is, boom, much more open and all over the place. We use every inch of space in that theater," he says, right from the moment that they burst in and greet the audience.

RESOLUTION VS. IRRESOLUTION
"‘Graceland’ offers resolution: By the end, these are two changed women. A decision has been made. But at the end of 'Never Swim Alone,' you’re left wondering: What will these two guys do?"
Green links the two plays in this way: While "Swim" will be the more thought-provoking script, viewers may, while discussing the shows afterward, come around to the idea that aggression and accommodation may be linked. The two very different women in "Graceland" are suspicious of each other at first, then tussle, then reconcile, then squabble again. There's a clearer kind of resolution at the end of Byron's play than there is in the genuine ambiguity of MacIvor's ending. But in both plays, compassion and antipathy are linked.

KATHIE’S ACTING
“Kathie [Doyle-Lipe] has a wonderful knack for timing. She knows when the beat is, when the play needs energy and then when it needs to slow down. She’s working to make it funny but not over-the-top funny, to try to avoid stereotypes," Green says. "There’s a lot of work between the lines” in "Graceland."

DANCING IN GRACELAND
There’s a short dance-of-joy sequence in "Graceland," but Green hasn’t been worried about how to choreograph it.
With Doyle-Lipe and Ashley Cooper, he says, he has "two of the best dancers in this market. I just had to make sure that somebody didn’t start doing five backflips.”

HATRED/BOYISHNESS IN ‘SWIM’
Green’s eagerness to get going as an actor in 'Never Swim Alone is obvious. At one moment, he says, the two alpha males trade insults — “And oh, the look we share — the hatred, the resentment. But then, when we become boys again [in a flashback], all that stuff is gone, and it’s just ‘Let’s race!’”

REFEREE NOT JUST A SMALL PART
As the woman in the bathing suit who acts as referee in a dozen rounds of psychological fisticuffs, Lauren Waterbury doesn’t simply have a small part. As Green says, "She runs the show. She has to know all our lines.”

WHAT FRANK DOESN’T KNOW HURTS HIM
“There’s a point in the play when Frank seems to have it all, and he’s very arrogant. but bill has something on him.” Bill, in other words, has some crucial bits of knowledge that Frank doesn’t know.
And in the eternal faceoff between alpha dogs, knowledge is power.
Bobo the Theater Ho at 7:02 PM