Interplayers announces most of its 2010-11 season

The nice thing is the realization that somebody thinks -- and is actually working toward -- Interplayers having a next season.
Its 30th.
In memory of Bob Welch, and in tribute to Joan, the theater community and the playgoers of the Spokane area -- both avid and lukewarm -- ought to pull together to keep this concern going.
Because without it, the dream of trying to continue to approximate resident professional theater in Spokane just goes by the wayside.
Enough editorializing. Just don't take your arts NPOs for granted.

In the following, months are approximate. 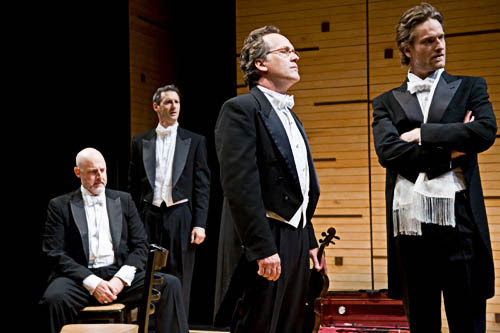 Six other plays are listed are listed on the subscription sheet handed out at tonight's preview performance of "Art," apparently as candidates for the two To Be Determined slots:

Honky Tonk Angels Holiday Spectacular, by Ted Swindley (I gotta admit, when Reed McColm alluded to this in his curtain speech, I thought he was joking. God help us.)
The Year of Magical Thinking, by Joan Didion (the one-woman show about grief, based on her experience in dealing with the deaths of her husband and daughter in a short space of time)
God of Carnage (another Yasmina Reza play, this one about to go into its third [and this time, all-black] cast on Broadway -- the premise has two wealthy married couples meeting after the 10-year-old son of Couple A has beaten up the son of Couple B)
Tuna Vegas, by Ed Howard, Joe Sears and Jaston Williams (apparently, this is like the CSI franchise -- it can be set in any locality)
boom, by Peter Sinn Nachtrieb (apocalyptic three-hander for horny/philosophical youth and a strange woman who keeps banging on the timpani)
A Murder, a Mystery and a Marriage; book and lyrics by Aaron Posner, music by J. Sugg

But back to the plays that are on the docket.
The first, of course, is McColm's sequel to his previous Christmas comedy.
Bobo just read The 39 Steps -- hilarious. Comic spy mystery. Dashing, stiff-upper-lip British hero finds himself embroiled in international intrigue. Plenty of hair's-breadth escapes. Three other actors: a woman to play the femme fatale and Scots farmer's wife; and two "clowns" tp play all the other roles.
Opus, recently done at Seattle Rep, is set in the world of classical music. A world-famous and all-male string quartet, due to the unreliability of one of its members, has to cut ties with him and hire a young woman -- with revelations about the past, both psychological and musical, in the offing.
Cotton Patch updates the gospels to modern-day Georgia.
Privilege, I am not yet privileged to know.

[ photo: from michaelhollinger.com ]
Bobo the Theater Ho at 10:20 PM