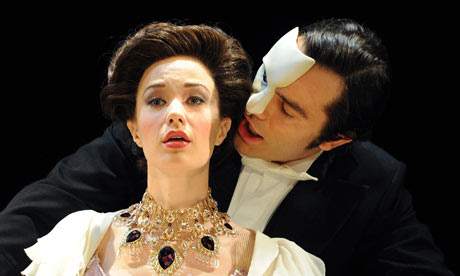 ... that is, unless chandeliers and soaring violins are involved.

The recent London premiere of Andrew Lloyd Webber's Love Never Dies — the sequel to Phantom of the Opera in which the Phantom, Christine and Raoul find themselves at Coney Island in 1907 — has been tagged by some wags with the so-boring, such-a-travesty nickname of "Paint Never Dries."

The reviews of Michael Billington in The Guardian and of Ben Brantley in the New York Times, though, follow a shared theme that suggests why Spokane will feel the Love in a touring version some years from now: a poor book featuring flat characters caught in unlikely situations, but — and here's the point — soaring melodies and lots of spectacle.

If you can hum the tunes on the way out and retain memories of a spectacular coup de theatre or two — well, that justifies the top ticket prices. All that other stuff is just filler. Billington and Brantley both emphasize that while the songs and spectacle are frequently effective, the story lags far behind.

This is exactly the wrong path for theater to follow. Especially in the impending era of 3D, we cannot compete with the movies on spectacle or soundtracks.

Do you want theater that's like an amusement park ride or like adult conversation? There's room for both, of course — but over-emphasis on the former will only drive up ticket prices, make "going out to the theater" a rare treat instead of a habit, and play into the hands of those who ratchet up the excitement factor until all entertainment relies on sensation instead of thought.

Trodding on plain boards, few special effects, appeals to the imagination, verbal exchanges, psychological insights, enough plot twists to keep it interesting ... if it was good enough at the Globe circa 1600 — and in Athens a couple of millennia before that — it should be good enough for us today.

But then Phantom first reached Spokane 11 years after its 1988 Broadway premiere; perhaps we have some time yet before the paint starts drying here.